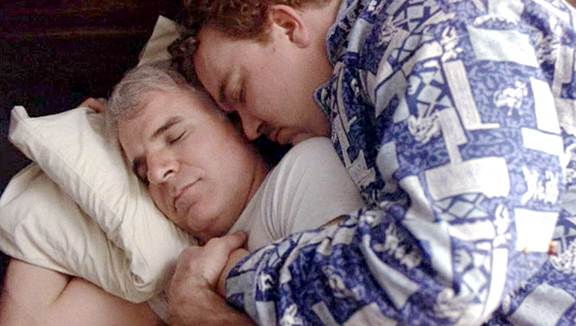 John Candy and Steve Martin in Planes Trains and Automobiles. In 1972, Candy was filming his movie debut in the film Class of ‘44.

If laughter is the best medicine, we could all use a laugh these days. Many of us have hunkered down at home watching comedy classics with a “maple” flavour like Ghostbusters, Airplane and Back to the Future…comfort food for the soul in troubling times.

What do you remember about 1972, the year this little newspaper (Ward 9 Community News/Beach Metro Community News) took its first baby steps?

Hockey fans cheered Paul Henderson’s goal in the Canada-USSR series. The Godfather made moviegoers “an offer they couldn’t refuse”.

In Toronto the rise of a new kind of humour with a “u” would transform the comedy world.

I remember seeing a group of talented performers in the musical Godspell. Eugene Levy, Dave Thomas, Andrea Martin, Jayne Eastwood, Martin Short, Paul Shaffer, Gilda Radner and company would soon form the seeds for the Second City troupe and later the “hoser” humour of the SCTV show (joined by Catherine O’Hara, Rick Moranis and John Candy). You can still catch Second City sketches at the Comedy Bar (on Danforth Avenue near Dawes Road.)

John Candy was making his feature film debut that year in Class of ‘44. Candy’s father died when John was only five and the family had to move in with his maternal grandparents in East York, just down the street from the Donlands Theatre.

Candy gave up his dream of playing football for the Toronto Argonauts after injuring his knee while at Neil McNeil Catholic High School. The school’s John Candy Visual Arts Studio is dedicated in his honour.

Candy may well be the most beloved comic actor of his era, playing endearing losers in films like Uncle Buck, Home Alone, Splash and Planes, Trains and Automobiles.

“Toronto in 1972 resembled one of those artistic nexuses that crop up now and then, like Paris in the twenties, Los Angeles in the thirties, London just before the First World War.”
— James Kaplan in 1987 New Yorker profile of music director Paul Shaffer.

It was serendipity that so many comic minds came together that year.

Toronto-born Lorne Michaels starred in The Hart and Lorne Terrific Hour and would leave for New York to create Saturday Night Live, the star-making show for NBC. Michaels hired Dan Aykroyd for the CBC and later for SNL. Aykroyd joined the Second City troupe in 1973 and ran an after-hours club on Queen Street East. One night John Belushi was in town and listened to the Downchild Blues Band. Famed composer Howard Shore (three Oscars) suggested Aykroyd and Belushi form a band and call themselves The Blues Brothers. The rest is hysterical history!

Toronto-raised filmmaker Ivan Reitman sadly passed away last month. In 1972 Reitman was directing Cannibal Girls with Eugene Levy and Andrea Martin (with a scene at Scarborough Bluffs). Reitman captured the mood of an era with comedies like Stripes, Meatballs, Animal House, Ghostbusters, Twins and Kindergarten Cop.

“I am serious…and don’t call me Shirley.”

Who can forget the deadpan antics of Leslie Nielsen (the son of a Mountie) in The Naked Gun and Airplane which was a parody of Flight into Danger by Arthur Hailey who lived on Fallingbrook Woods.

A new generation of Canuck comic actors followed with a blend of English satire and American jokes: Mike Myers, Jim Carrey, Michael J. Fox. It’s our gift of laughter to the world. Just remember who said it, eh!

“We’re on a mission from God.” Dan Aykroyd in The Blues Brothers.

“Are you troubled by strange noises in the night?” Dan Aykroyd in Ghostbusters.

“What kind of a mother am I?” Catherine O’Hara in Home Alone.

“Between two pillows.” John Candy in Planes, Trains and Automobiles.