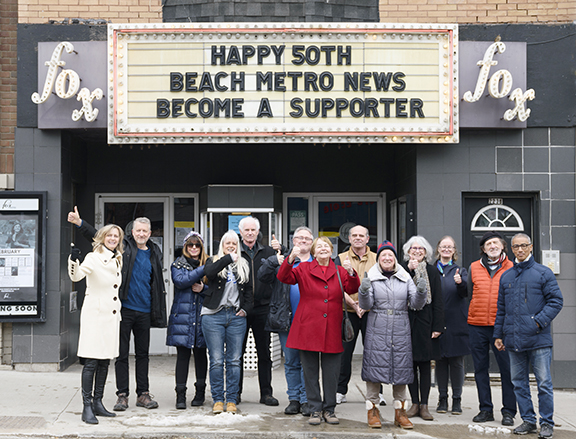 Beach Metro Community News celebrates its 50th anniversary with the March 8 edition of the paper. Staff and members of the volunteer Board of Directors gathered in front of the Fox Theatre on Queen Street East to mark the occasion. Photo by Adam Owen-Gill.

The first edition was published on March 1, 1972 as Ward 9 Community News. It was four pages, and included an editorial that said:
“Its success as a newspaper will depend on the quality of the news we write and the community’s response to the idea of a paper that will reflect and comment on their interests and concerns.”

Throughout that first year, the proposed Scarborough Expressway was a dominant issue and the paper helped residents fight the plans that would have seen hundreds of homes torn down. Community leadership and the ability to give a voice to residents has shaped this newspaper’s actions for the past 50 years.

In 1988, we changed our name to Beach Metro Community News to reflect that the old City of Toronto’s Ward 9 no longer existed and that our coverage area had expanded.

The print edition of today’s Beach Metro Community News features some special columns from our regular contributors, a retrospective of more than 40 years of cartoons from Bill Suddick, an interview with Mayor John Tory on the importance of community newspapers, and congratulations from many of our advertisers.

As we celebrate our 50th anniversary we are also now looking to our readers to support us as we continue our work in the years to come. To learn how you can become a Beach Metro Community News Supporter, please go to https://beachmetro.com/donations/support-beach-metro-news/