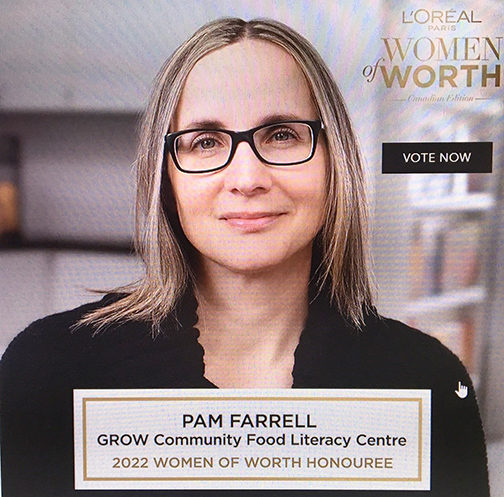 Pam Farrell founded and operates an organization that gets healthy food to those in need. Because of these efforts, she won one prize for her organization and may be voted to win a second, grand prize.

The contest is the L’Oréal Paris Women of Worth (2022, Canadian Edition). The contest awards women who dedicate themselves to creating positive change for Canadians.

Farrell was one of this year’s 10 honourees. For that her charity was awarded $10,000. Now, the vote for the winner is going on. If Farrell wins, she will be provided a second $10,000 toward her charitable efforts.

Farrell’s organization is called GROW Community Food Literacy Centre, or just GROW. It was started in 2020, in Niagara Falls. The purpose is to connect people to healthy food and help them have a healthy diet.

“Our basic framework relies on a critical food literacy lens that takes into account the contextual factors and influences on our food literacies. This means that we can’t ignore the environments that people find themselves in, such as low-income, or not being able to access the foods they want because of location or income.  We do this by offering a subsidized market, food literacy programming, and food security advocacy,” said Farrell.

GROW operates a low-cost market that people can sign up to, if they can show their income is at a level of impoverishment. Another major aspect of the organization is a selection of programs which teach people to produce, store, and cook food in a healthy way.

Farrell was at one time a Beach resident. Between 2001 until 2011, she lived near Juniper and Wheeler avenues, and then near Queen Street East and Maclean Avenue.

She travelled back to her hometown of Zürich, Switzerland and upon returning to Canada, she settled in Niagara Falls.

Farrell explained how the GROW framework of fighting poverty and hunger is very much applicable to Toronto.

“There are pockets in Toronto that would be considered food deserts—an area in a low-income neighbourhood that does not have access to an affordable grocery store. As the gap continues to widen between income and living costs, so does the need for new approaches to food security,” said Farrell

For information on how to vote in the L’Oréal Paris Women of Worth (2022, Canadian Edition), please go to https://www.lorealparis.ca/en-ca/women-of-worth

The contest goes until March 6 of this year.