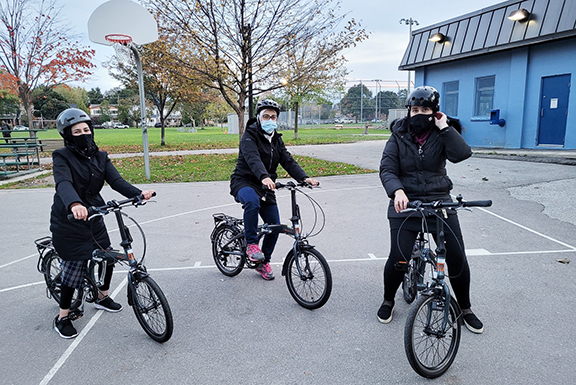 Scarborough Cycles, a program of Access Alliance in the southwest Scarborough area, is set to begin its third year of Hijabs and Helmets events to encourage cycling among Muslim women in the community. Photo: Submitted.

Hijabs and Helmets is back for its third event in which cyclists of all levels are invited to ride in an effort to promote anti-islamophobia, physical fitness, and to empower hijab-wearing women to enjoy cycling in a safe and inclusive environment.

Hijabs and Helmets partnered with Scarborough Cyles in 2019 to encourage Muslim communities to begin cycling. Scarborough Cycles has been a program of Access Alliance in the southwest Scarborough area since 2015.

For many, cycling was intimidating according to Maha Mohamed, a Settlement Program worker who has gotten to know all the participants and their families.

“When I began promoting for this program the girls were a bit shy,” said Mohamed. “They joined the program to gather together and walk out as a group to the park with their bikes. After the first ride with them, they told me ‘We feel that we are recognized and that people can see us. We are respected here, we exist’.”

The event will start with a nature walk from Victoria Park Station on Tuesday, March 1, from 5 p.m. to 7 p.m.

The event was thought of by Fei Tang, a manager at Access Alliance, who noticed the lack of Muslim engagement in cycling in her community.

“It’s just a glaring miss, right?” said Tang. “We’re in Scarborough, where we have the biggest Muslim population in Canada, and you don’t have any hijabi women on the streets riding their bikes. There’s got to be something wrong about this, right?”

Tang wanted to change the perception that cycling wasn’t an appropriate activity for Muslim women.

“We wanted to make cycling more immigrant friendly,” said Tang. “We want to be more inclusive. We also wanted to use this as a symbol because everything people wear is the expression. They have the freedom to express their religious belief by wearing something or not to wear something. It’s their freedom.”

Hijabs and Helmets is on its way to accomplish the goal to make cycling more inclusive, not just for Muslim women but for everyone according to Marvin Macaraig, Coordinator of the Scarborough Cycles program. He also oversees all cycling programs at Access Alliance.

“We have succeeded,” said Macaraig, who also operates the week-to-week operations of Hijabs and Helmets with Mohamed.

“Our evaluations are showing that people are riding more and they’re getting to make more new connections.”

Some of those connections aren’t limited to cycling and are very important to both the participants and the organizers according to Macaraig.

“It’s nice to hear when they come back to me that they’re actually going beyond Hijabs and Helmets,” said Macaraig. “Things like recreational rides and that they’re starting to organize their own rides for their own family members.”

To register for the events, please go to https://docs.google.com/forms/d/e/1FAIpQLSeS7M00y1d5PvV1O-dpKvvlO2wWUD_IIUBfl6RP8S9FRm0LZA/viewform