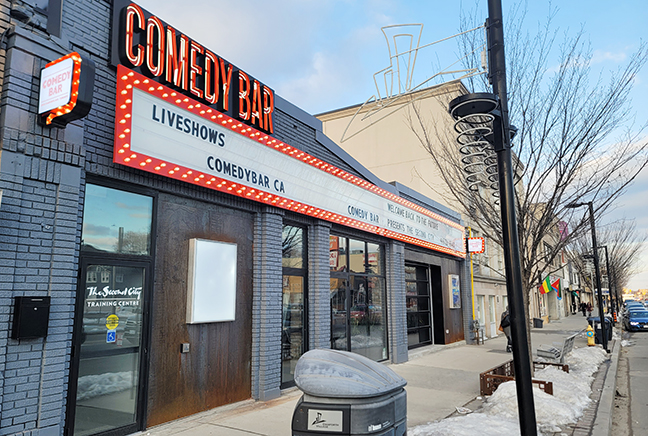 Located at 2800 Danforth Ave., between Main Street and Victoria Park Avenue, Comedy Bar is open for business and has a number of shows lined up.

Toronto’s Comedy Bar has expanded to the east end of the city.

Located at 2800 Danforth Ave., between Main Street and Victoria Park Avenue, the Comedy Bar has a number of shows lined up in the coming weeks. The club is happy to be re-opening since its temporary closure in December and January because of the COVID-19 Omicron variant.

Comedy Bar was founded by Gary Rideout Jr. and James Elksnitis in 2008. The club’s first location was at 945 Bloor St. W. in the west end of the city. Rideout Jr. and Elksnitis have been performing comedy since 2000.

Rideout Jr., who along with being co-founder is also the artistic director of Comedy Bar, said he excited to have the club opening on Danforth Avenue.

“James and I grew up in the east end of the city. We both felt that this part of the city was underserved especially in terms of comedy and theater as well as in terms of creative spaces which focused mainly on the downtown core area,” he said.

Although the Danforth East area is not known as a hotspot for comedy clubs, Rideout Jr. and Elksnitis felt this location would bring people together and give them something to look forward to in the neighborhood.

Comedy Bar along with The Second City Training Centre has been conducting workshops in improv comedy, stand up comedy and sketch comedy.

They also have anxiety related programs for people who deal with forms of anxiety. On the corporate level, they train people with their communication skills which will ultimately make them better storytellers.

The Second City Toronto, an improv and comedy theatre and bar has temporarily moved its location to Danforth Avenue, since its permanent residence is under construction and will not be ready until mid-2022.

“Comedy Bar is not related to Second City. They do not have a theatre right now which is why we have offered them residence here,” said Rideout Jr. “Since Second City does sketch comedy, they will be performing a two-act show consisting of songs and improv scenes. Over the next five to six months, the same cast will be performing eight times a week, every night at the Danforth location.”

With the phased lifting of pandemic restrictions in Ontario this week, Rideout Jr. recommends coming to watch Second City’s mainstage show called Welcome Back to the Future. The show will be running Tuesday through Sunday.

One of the cast members of the show, Tricia Black, has been nominated for the Canadian Screen Awards.

Rideout Jr. said that while they were open briefly in December for a few weeks, the time when the theatre was closed due to restrictions was used to fix things up in a brand new space that they had just built.

“We are excited to get back and be open again. We will continue to follow the regulations and adjust accordingly to make sure that everyone feels safe, comfortable and has a good time,” he said.

For more information on the Comedy Bar and upcoming shows, please go to https://comedybar.ca/