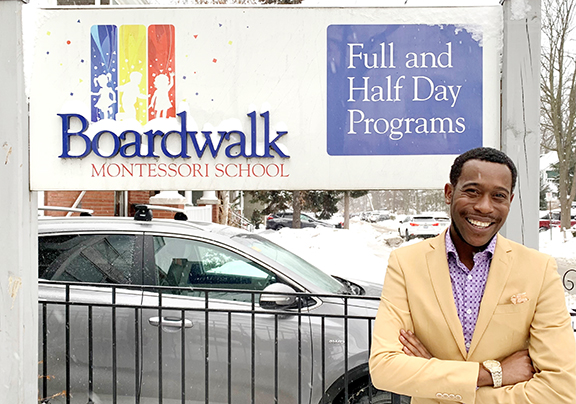 Jamar Peart is the Montessori Director and Consultant at the Boardwalk Montessori School in the Beach. Photo by Mimi Liliefeldt.

How many of us are lucky enough to have found our calling? The strong inner pull towards a career, craft or act of service is elusive for most, but a few fortunate souls know who they are and what they are supposed to do from an early age.

In elementary school Jamar Peart knew he wanted to be a teacher.

“When I was in Grade 2 I would set up all my stuffed animals on my bed and hand out tests so I could mark them. I loved to play the teacher. I was so fascinated, I wanted to take my teacher’s curriculum books so I could make the same type of work sheets at home,” Jamar told me with a mischievous smile.

Jamar is an honorary Beacher, though he currently lives in Ajax with his fiancé Alec, he is the Montessori Director and Consultant at the much-respected Boardwalk Montessori School on Waverley Road.

In a world of varying degrees of ordinary, Jamar stands out as extraordinary. His brilliance is indisputable, and his energy is infectious.

He’s exactly the kind of person children (and adults) gravitate towards.

“I’m an exuberant person, with a big personality. I really have a way with children, and I think that’s one of my biggest assets. I’ve had parents follow me from school to school; it’s happened a few times and it makes me feel great, because it means I must’ve done something really good during the year to build that kind of trust,” Jamar told me.

As a young, Black, gay man raised by a single mother from Jamaica, Jamar has never wanted to be seen as a charity case. “Seeing my mom struggle, showed me how important it is to be self-sufficient. She is so strong, and I learned a lot from her. She encouraged me to follow my passion, saying there were not enough of us (Black people) being represented in education.”

Years ago, when Jamar was interviewing for a job, the interviewer mentioned that they had brothers who were also gay. The meeting wasn’t their first, and it was clearly going well, but this piece of information had Jamar second guessing if he might be a diversity hire.

A diversity hire is hiring someone from a diverse background whether it be race, gender, age or ability for the purpose of enhancing the image of a company. There is a lot of discomfort and miscommunication around this practice.

It is important that as a society we become conscious of our unconscious biases, but it is more meaningful that we actively create spaces that feel safe and welcoming to everyone.

Having biases doesn’t make us bad, it makes us human, but we must work at dismantling them. Hiring someone because you are hoping to change the environment of your workplace also isn’t bad, unless your efforts aren’t genuine, you need to make other attempts to foster authentic inclusion.

This is where Jamar instinctively excels. He knows how to add diversity to his curriculum in a way that feels natural and fun.

When I asked what it is that he teaches the young kids about diversity and inclusion he showed me a video (which was approved for public viewing and can be found on Facebook) of the students playing a memory game of Black inventors.

The five-year-olds were able to recognize and name the Black inventor and their innovation. They proudly identified each person and proclaimed, “Thomas J. Martin invented the fire extinguisher! Garrett Morgan invented the modern traffic light!”

It was delightful and reassuring to see that these children will grow up with an education that isn’t skewed only on the white experience.

When I asked Jamar about the importance of teaching diversity to young kids he said, “They’re in their formative years of life. Any experience provided during this time is going to be impressionable. We want to give them knowledge that’s going to help prepare them for real life. In February we’re talking about Black History Month and I’ll be sharing with them why it’s important. Our conversation might start with, ‘For a long time, people like me were not treated fairly’. For example, yesterday we read about Rosa Parks and a child raised their hand and said, ‘You’re allowed to sit with me on the bus’! And I said, ‘Well thank you! And are we sitting at the front or the back’? And he said, ‘At the front’! So, they’re getting it.”

Jamar is an incredibly dedicated educator who strongly believes in his work with Montessori schools.

About the Montessori philosophy he said, “I really believe it’s so important to have an approach to learning that is about not just education, but also nurturing the child emotionally, spiritually, physically, mentally and socially. The learning is very comprehensive but also delivered in a way that’s accessible to the children. That’s where Montessori shines.”

Helping our young develop a social consciousness is a relatively new concept.

Many parents today still prefer to keep their children shielded from life’s unfairness, but if you’re a child growing up without all the advantages of ‘fitting in’ you don’t get to enjoy living in that bubble.

Jamar shared with me that though he never really felt much discrimination about his skin colour, he did have to face the bigotry and inner turmoil that came with being gay.

“I knew I was gay at a young age. Around age 10, I was starting to think this boy is pretty cute. But by Grade 8 after I had time to deal with my feelings, I wanted a girlfriend because I thought I needed to ‘correct’ myself, I wanted to be accepted and to fit in,” he said.

“It worked well enough but high school was still hard for me. I would skip school with a friend because I felt like I was confused about my identity. I did not know how to express myself at all. There were clothes that I would want to wear but didn’t wear … I was constantly being talked about; my sexual orientation was always put to question. I was not called any derogatory terms to my face, it was always behind my back, but because I had so many friends that were girls, they would bring the gossip back to me. There was one bigger bully who would yell things out at me from his truck. Eventually I did have to tell the principal. I felt it made things worse, but I had one month left of school, so I finished it and never looked back.”

This last statement doesn’t surprise me. Jamar is a person who doesn’t dwell on the past or the things that may have hurt him. He truly lives in the now and works towards the future. The ability to be fully present is a gift and he shares it wholly with his students.

Naturally he is already thinking about his future.

“My dream has always been to own and operate my own small Montessori school. I want to give back. I believe that Montessori is for everyone, studies show that not many Black families are even aware of the Montessori system. And possibly the ones that are aware, may write it off thinking it’s too expensive or that their child might not fit into that type of experience, but that couldn’t be further from the truth,” he told me. “My goal is to make my school welcoming and accessible to Black families.”

He bolstered his statement by astutely adding, “In order to make the changes we need to see in the world right now, it starts with education.”

I know Jamar’s dream will come true, because the leaps and bounds he has made in his career are all a testament to his determination and enthusiasm for what he does.

He knows who he is, what he’s supposed to be doing and believes in it with his whole heart. We should all be so lucky to have that kind of clarity.

— Mimi Liliefeldt is a Beach resident and business owner. She can be reached at mimi@missfit.ca

What a great read! Jamar is such a inspiration.