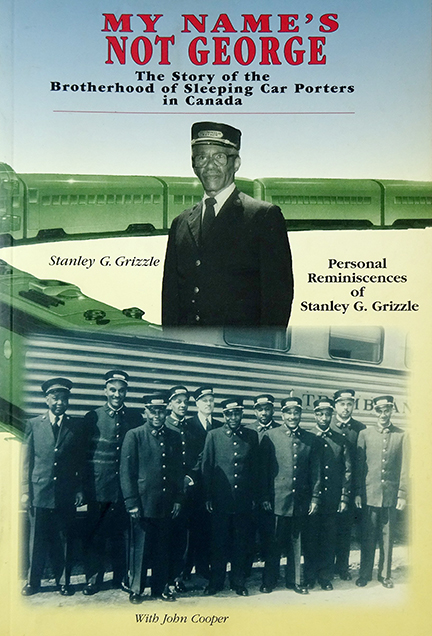 Stanley Grizzle, who has a park named after him across from Main Street Subway Station, wrote his memoir My Name’s Not George in 1998.

People pass through the Main Street Subway Station every day, but how many know the name of the little park across the street? Stanley G. Grizzle Park runs from Main Street to Chisholm Avenue where the Grizzle family lived for many years.

Who was Stanley Grizzle? Born in Toronto in 1918 to Jamaican immigrants, Grizzle was the first Black citizenship judge and a tireless advocate for labour and civil rights.

For 16 years he was President of the local chapter of the Brotherhood of Sleeping Car Porters, the first Black-led union. A new eight-part CBC dramatic mini-series, The Porter, debuts on Feb. 21.

The Porter is set in the Montreal of the 1920s, but tells the stories of railway porters across North America.

In the years after the First World War, porter was one of the only jobs available to Black men. The pay and working conditions were terrible. Can you imagine being on duty for 21 hours a day?

Porters were called demeaning names like “George” or worse. (George Pullman was the inventor of the sleeping car for longer train trips.) Grizzle titled his 1998 memoir My Name’s Not George. His union fought to have porters called by their proper names.

Leonard Johnston worked as a porter for more than 30 years and with his wife Gwendolyn opened Third World Books and Crafts which became a centre for Black history and culture. When Quincy Jones was doing research for the mini-series Roots he came to their bookstore.

Grizzle and Johnston advocated for equal rights for all. In 1959, Grizzle was one of the first two Black Canadians to run for the Ontario legislature.

Two 15-year old Malvern Collegiate students made news headlines in May of that year for very different reasons. Bruce Kidd was winning races. Clayton Johnston (Leonard’s son) was a talented athlete and musician.

In 1959 rock n’ roll was here to stay. A group of Malvern students wanted to travel to Buffalo for the popular live WGR-TV show Dance Party. Principal J. Leslie Kerr said not on my watch, but some older students organized the trip anyway.

During a “Spotlight” dance Clayton was dancing with a “white girl.” Some outraged (and ignorant) viewers phoned the station to complain. Clayton was asked to leave the dance floor and he went walking in the rain to “cool off.”

Malvern students were very upset. The incident was front page news in Toronto with calls for an apology. Stanley Grizzle spoke out on behalf of the family.

Clayton Johnston went on to a career as a jazz musician playing with stellar performers such as fellow Malvernite trombonist Russ Little.

Stanley Grizzle died in 2016 after a long life of achievement.

If Clayton’s story sounds familiar, watch the 2007 musical version of Hairspray which was set in 1962 Baltimore, but filmed in Toronto (including the “Hardy Har Hut” on Eastern Avenue at Carlaw).

In Hairspray, teens protest against segregated dances and hold up signs such as “Let Our Children Dance.”

The Porter is set a century ago, but the struggle for equal civil rights goes on around the world.