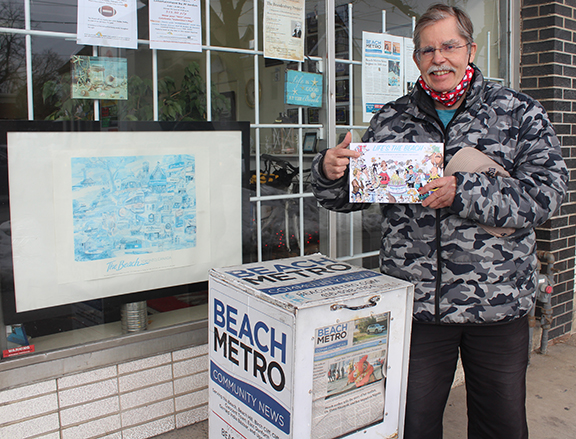 Cartoonist Bill Suddick with his book Life's The Beach. The book celebrates his more than 40 years as a cartoonist and the 50th anniversary of Beach Metro Community News. Copies of the book can be purchased at the Beach Metro News offices, 2196 Gerrard St. E. with a portion of the sales going towards supporting your local newspaper. Photo by Alan Shackleton.

Bill Suddick celebrates more than 40 years of cartooning for Beach Metro Community News, and the papers 50th anniversary in March of this year, with his just-released book Life’s The Beach.

Now on sale locally, including at the offices of Beach Metro Community News, the book is 135-pages of glossy cartoons from Suddick’s more than four decades of newspaper cartooning in the community.

In the book, Suddick also shares some of the stories behind the cartoons.

“The cartoons (and stories) in this book are mostly about ‘The Beach’, one of the coolest neighbourhood’s on the planet,” wrote Suddick in his introduction to Life’s The Beach.

“It’s like a small town, sitting on the edge of a big city. The lake, beach and boardwalk give the place a laid-back vibe that I have heard described as ‘California North’. Though that may not be too apt a description in late January. It’s also a place where people like to volunteer and help one another.” Suddick said linking the book to Beach Metro Community New’s 50th anniversary made perfect sense, and it was something he started thinking about last year as he also marked his 40th year of cartooning for the paper.

“The paper is celebrating 50 successful years of reporting grass-roots community news. I felt a book would be a great way to commemorate both milestones,” he said.

In the book, Suddick shares how he first started doing cartoons for the paper (which from 1972 until 1988 was known as Ward 9 Community News).

He had decided to use his graphic artist and illustrator training as a freelancer after deciding in the very early 1980s that the corporate world was not for him.

“It was my wife Debbie’s suggestion that I approach the local community newspaper, then called the Ward 9 News, to see if I could do a regular editorial cartoon about the Beach. It would give me a chance to get my work ‘out there’,” said Suddick.

“Fortunately, Joan Latimer, the editor at the time, gave me a try-out, allowing me to create some cartoons…for free. It paid off!”

Suddick’s first cartoon appeared in the April 7, 1981 edition of the paper, and the rest was history.

With so many creative people living in the Beach and seeing his work in their local newspaper, it led to many other opportunities for Suddick including working with The Toronto Start, the Globe and Mail, Reader’s Digest, TVOntario, Science International and other organizations.

“I met a lot of amazing, interesting people in journalism, advertising, TV and art in general,” said Suddick in the Life’s A Beach introduction. “A raucous, wacky, amazingly talented bunch who I’m sure were told to find a real job at one time or another.”

Among the cartoon topics that are near and dear to local residents are the never-ending disputes about whether it should be called Beach or Beaches, the parade of characters walking, running or cyling by the lake, and the number of dogs running around unleashed. The unleashed dog dispute was the topic of Suddick’s first cartoon in the paper.

“I get a lot of my ideas on the boardwalk or the Martin Goodman Trail,” writes Suddick in sharing the story of a cartoon in which an unleashed dog crashes into a cyclist (something that happens far too often in the community, often causing serious injuries to both the cyclists knocked off their bikes and the dogs). “This actually happened to me,” he wrote of being hit by a dog while riding his bike. “A medium sized dog ran across the trail and bounced off my wheel. No, he didn’t actually go through the spokes (as depicted in the cartoon). I just thought that would be funnier. Fortunately, he just shook himself, smoothed the spoke lines out his schnoz and kept going.
“His human was quite mad at me for having the gall to ride my bike on the bike path. People and pets unfamiliar with the trail often cross aimlessly or walk in the middle without a look or care. Combine this with the ‘Tour de France’ types who go full out and you’re bound to have close calls. Be careful out there.”

A portion of the proceeds from the 100 copies available to be sold through Beach Metro Community News at a price of $28.25 (which includes HST) will go to support the paper.

Beach Metro Community News is a non-profit community newspaper with a Volunteer Board of Directors made up of area residents that has been providing quality local journalism since March of 1972.