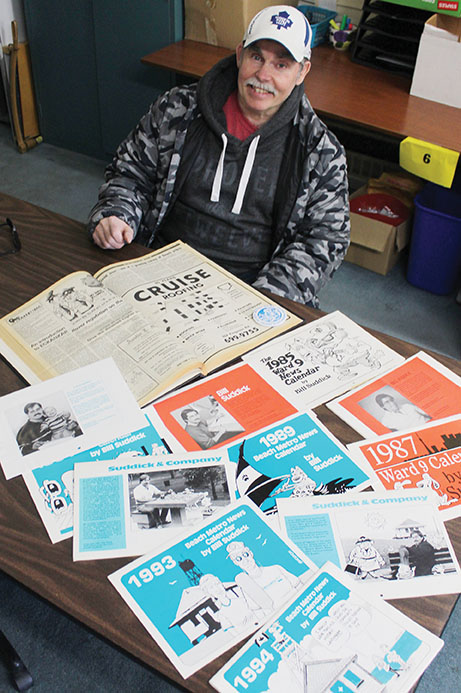 In March of 1981, Bill Suddick was hired on as the cartoonist for what was then Ward 9 Community News. His first cartoon appeared in the April 7 edition.

It featured what was to become a familiar theme for the East Toronto resident who is now in his fifth decade of cartooning for the paper: An off-leash dog in the Beach.

In a recent interview to celebrate the start of Beach Metro News’ 50th year (the paper changed its name from Ward 9 to Beach Metro in 1988), Suddick said that the animals, both wild and domestic, of the Beach are among his cartooning inspirations. “I have a lot of fun with raccoons, people not picking up after their dogs, minor hockey, the Boardwalk and many other Beach-centric topics,” he said.

Suddick grew up mostly in Willowdale, and attended Earl Haig Secondary School where he said the “studied football.”

He first moved to Courcelette Avenue where he rented the lower level of a house with his fiancé. His future brother-in-law rented the upper flat in the house.

“I really liked the neighbourhood and being close to the lake,” said Suddick.

“We gradually moved westward. We bought our first house on Malvern Avenue (School dance nights were always interesting.) Then we moved to the Coxwell and Gerrard neighbourhood.”

Suddick said he had always been interested in art, and would spend lots of time drawing with his grandfather.

“My grandfather encouraged me by rolling out shelf paper and we would draw for hours,” he remembered. “He was pretty good too. I guess I got that gene.”

As he got older, he started to realize that he could probably make a career from what had been a hobby with his grandfather.

“I started to realize that I might be able to make a living doing art. I didn’t listen to well-meaning adults who strongly recommended against art careers in general,” he said. “I got accepted in Animation at Sheridan College but, on the advice of yet another well-meaning adult, who shall go unnamed, decided to take another program. I now regret not taking Animation.”

He said he contacted his local newspaper about cartooning on the advice of his wife, and was told he was hired on March 26, which was his 26th birthday.

Suddick said he was in need of a boost of confidence at the time as his talent for drawing caricatures of people had gotten him into some trouble at a previous job with a screen printing business.

He had been making the same mistake a number of times, which caused his boss to get angry. “I made this mistake a couple of times and each time he would get redder and louder,” Suddick remembered of the former boss.

“Unfortunately, after one of his outbursts I was inspired to draw a small two-inch caricature of him on a corner of the cardboard covering my art desk. It was dead-on. Little did I know that one of my colleagues decided it might be fun to cut out the drawing, blow it up to life-size and mount it on the front door.”

Suddick was let go from that job shortly afterwards.

He said applying to do an editorial cartoon for the paper was not a stretch given his drawing talents and admiration for others who did it.

“I loved the work of Duncan Macpherson at The Star and many others such as Sid Barron and Aislin and Giles, the British cartoonist. At the time I knew the full-time opportunities were limited to about 15 or 20 major dailies across Canada. Doing a cartoon for the local paper would be an outlet, and a way to see if I could come up with ideas on a regular basis. It would also give me some exposure, I hoped.”

It was a move that paid off for Suddick in many ways.

“Many creatives, including newspaper people lived in the Beach and they started seeing my work on a regular basis. This exposure really helped when I approached publications such as the Toronto Star and Globe and Mail. I picked up regular work doing a weekly cartoon for The Star’s Wheels section. Dennis Morgan was the creator and editor of the Wheels section. He happened to live in the neighbourhood.”

Suddick also did work for The Star’s kids’ page section called Starship, which was put together by another neighbourhood resident named John Robinson.

“I discovered he lived one street over from me and we became good friends. One thing led to another, one contract led to another and helped me build my career,” said Suddick, who has also taught art and illustration.

“I met a lot of amazing, interesting people in journalism, advertising, TV and art in general. A raucous, wacky bunch who I’m sure were told to find a real job at one time or another.”

Suddick said that being cartoonist for Beach Metro News also gives him a level of local celebrity.

“There’s a certain notoriety in it. I often had people telling me they liked, or objected, to certain cartoons or that they recognized people I had put into the cartoon.”

He said his philosophy towards editorial cartooning is one of trying to tell the “unbiased truth with a funny angle’ while combining some opinion.

“Most of my stuff is based on ‘slice of life’ situations, but occasionally I’ll go with a political issue,” said Suddick. “Politics seems to be the only job where you can continually be involved in scandals, make monumental mistakes and still manage to keep your job.”

Many of the cartoons are also reflections of situations Suddick has seen himself.

“I base my cartoons on my own experiences and stuff I see around the neighbourhood. Dogs and people suddenly crossing in front of my bike on the Martin Goodman Trail, two people carrying a canoe, Voyageur style, across Queen Street, a leashed dog pulling a skateboarder along the Boardwalk…a hockey dad yelling and jumping up and down.

“Sometimes I ask myself ‘what if?’ Such as what if the Beach coyote happened to be wearing an Easter Bunny costume in the Easter Parade?”

When it comes to politicians, Suddick has drawn a lot of them over the years including Justin Trudeau, Kathleen Wynne and Donald Trump. The late Rob Ford, Toronto’s mayor from 2010 to 2014, was a politician he drew a lot since he provided plenty of material.

“I enjoyed drawing cartoons about Rob Ford’s antics. I actually liked the guy and my heart went out to him and his family. He was a good guy at heart.”

Sometimes people did not like his cartoons at all, and this has resulted in a few tense situations over the years.

One involved an incident at a local café in which a number of runners had been kicked out because they had not bought anything while waiting for the slowest member of their group to catch up and join them.

“I did a cartoon indirectly relating the owner to a certain soup-selling character in Seinfeld. I referred to the cafe owner, in good fun, as the ‘Croissant Fascist’, not naming any names of course. Well, the merde hit le ventilateur as it was.”

Over the years, Suddick has seen many changes in the way cartoons are produced for newspapers. He’s gone from large hand-drawn black-and-white cartoons on cardboard which he personally handed in to the paper to emailing cartoons.

“Back when I started, I would ride my bike up to the old YMCA offices and hand deliver an original cartoon. I still hand draw them, then scan them into Photoshop and colour them with a stylus. I just email them nowadays, which is instant but not at all good for my overall physical fitness.”

Suddick said he’s thrilled to still be involved with Beach Metro News as it enters its 50th year, though year 49 will go down as one of the most challenging due to COVID-19.

“Stay positive. We’ll get through COVID. If you want to get into a creative career, go for it. Make your own mistakes. Help and encourage people along the way.

You can find more information on Suddick’s work at https://www.redbubble.com/people/wally7/shop