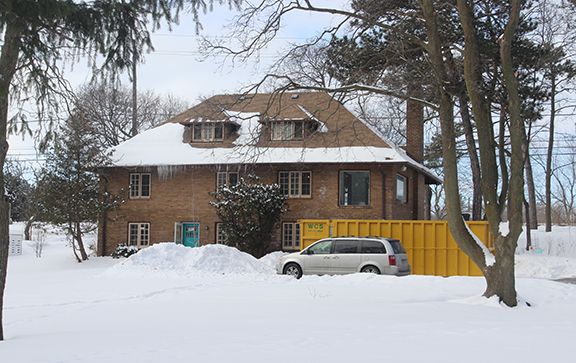 A rear view of the house at 1859 Kingston Rd. that is home to Scarborough Arts and the Bluffs Gallery. The house suffered extensive flooding earlier this month. Photo by Alan Shackleton.

Scarborough Arts is facing a challenge after flooding caused extensive damage and forced the closure of their Bluffs Gallery building on Kingston Road.

The flooding also damaged furniture and equipment in the Scarborough Arts offices and gallery which are located in a house at 1859 Kingston Rd., just east of Birchmount Road, on grounds of The Harrison Estate.

The flooding was the result of multiple burst pipes caused by a malfunctioning HVAC (Heating, Ventilation, and Air Conditioning) system on Jan. 14, said Scarborough Arts. The building was closed immediately until further notice and current estimates are that it will remain closed for at least eight months and possibly up to a year.

It was area residents who alerted Scarborough Arts last week that there appeared to be an issue with the building.

“We should actually give a really big shout out to the two community members that were out for a walk in our neighbourhood,” said Derek Spooner, Executive Director at Scarborough Arts.

“They saw water pouring out of the building and into the park of our building like a waterfall,” said Spooner. “After coming closer, they realized that the ceiling was capsized.”

“We owe a lot to the people in the neighbourhood who said, ‘Hey, something’s going on at the building’,” said Spooner. “That’s also a testament to the vibrancy of the local community.”

Scarborough Arts have been operating at their current location since 1978, while the history of their building itself, owned by the City of Toronto, goes back much further.

“It was actually built in 1927 with arts and crafts architecture,” said Spooner. “So it is quite an old building.”

Scarborough Arts offers a variety of programs and provides space for arts and cultural groups to engage in endeavours such as poetry or film making.

“We act as a hub for Scarborough as a place for people to come and create,” said Spooner. “But also out of our offices, we provide many services as well to the local community. In the past, we’ve done things like the Cultural Access Pass, which gives New Canadians an opportunity to access cultural resources, events and institutions all across Canada.”

Spooner, who joined the organization in 2018, was dismayed at the extent of the damage done to the building and much of the material it contained.

“I would estimate that approximately 65 to 75 per cent of the building has been completely damaged,” he said.

Despite being in the early stages of assessing just how much was lost, what is known is that the losses are substantial.

“We lost a lot of office equipment, a lot of electronics, speakers, projectors, computers, and fans,” said Spooner. “We also lost a lot of furniture. Tables were totally damaged and the wood on the bottom is now so wet that it’s just going to crack, and we lost our boardroom table.”

There was also flooding of the basement where many items were stored.

“We’ve lost a lot of art materials which is another thing we use the basement for,” said Spooner. “Basically everything flooded down and so the day that we showed up, there was about four to five inches of water in our basement.”

Not only has the community lost one of Toronto’s six Local Arts Service Organizations (LASOs), the staff at Scarborough Arts are just as distressed at the prospect of not being able to return to the building for as long as a year.

“Our staff is quite devastated,” said Spooner. “It’s devastating to lose your home like that. But we also hope that, maybe in a tongue in cheek way, this will be a watershed moment for us to come back to a more functional space.”

In addition to repairing the pipes and renovating the HVAC capabilities, other amenities are also being planned to make the restored Scarborough Arts building more accessible. Improvements such as an accessible washroom as well as a chairlift for those in the community with mobility issues are being designed, although that will add to the time the building will be inoperable.

Despite the scale of the damage, material lost, and the organization being displaced, Scarborough Arts hopes to return even stronger than ever once the repairs and renovations are complete.

“I think the silver lining here is that we’ve now identified that there’s an HVAC issue that we hope that our partners at the city will address,” said Spooner. “So long as that is addressed, I think that will make sure that the building is safe and comfortable for everybody.”

Scarborough Arts appreciates the continued patience and of the community’s support during these difficult times. For information on how you can contribute to Scarborough Arts, please go to https://www.canadahelps.org/en/charities/scarborough-arts/

Really sorry to hear about the extensive damage to the beautiful (1927) original building which housed Scarborough Arts and the Bluffs Gallery. Lots of great memories of creative meetings with fellow artists, staff and friends. Hope it’s up and running again soon!