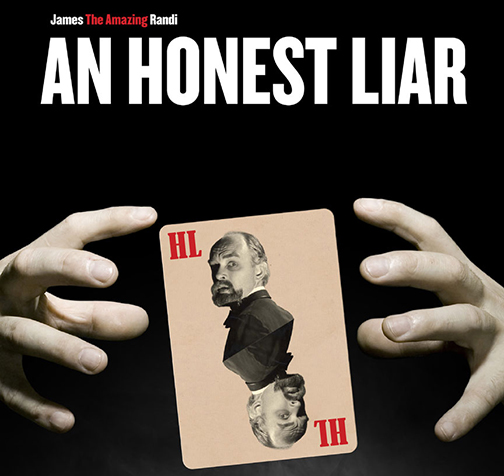 An Honest Liar, on YouTube, tells the story of Randall James Zwinge (The Amazing Randi) who was born in the Beach in 1928.

Scams seem to be everywhere. Fraudsters try to redistribute wealth from your pocket to theirs. Apparently Canada Revenue is after me. Not only that, but my grandson is in jail, which is odd because I don’t have a grandson.

One notorious conman sold the Eiffel Tower for scrap…twice.

In Nightmare Alley Bradley Cooper plays a carnival huckster who learns the art of deceit and becomes a nightclub mind reader. The clothes are fancier, but he uses the same old tricks.

The film is based on the dark 1946 novel by William Lindsay Gresham (1909-1962), an amateur magician who was fascinated by the carny underworld. Like Harry Houdini before him, Gresham exposed many of the techniques used by phony spiritualists and psychics.

In 1959 Gresham wrote a biography of Houdini and dedicated his book to “the greatest living escape artist, The Amazing Randi” magician James Randi who helped him with the illusions.

Randi began life in 1928 as Randall James Zwinge (rhymes with “Swingy”) in the newly-built Victoria Park Apartments on Queen Street East near Willow Avenue, which was just down the street from the Prince of Wales Theatre (now the Fox).

A century ago streetcars came all the way out to the new Neville Park Loop and spurred a building boom along the eastern end of Queen Street.

With two more kids on the way the family outgrew their apartment and moved to a home in Leaside. Their name was the last one in the phone book and Mrs. Zwinge was annoyed by 3 a.m. crank calls. Ironically Mr. Zwinge worked for Bell Telephone.

Young Randall dropped out of high school at 17 and left home to become a “conjuror,” the all-knowing wizard Prince Ibis, in a carnival roadshow. He never went home again.

Some say it takes one to know one and Randi learned every trick in the book. He even “communicated with the spirit of Houdini in the hour of his death” at a Star Santa Claus Fund Show on Halloween in 1949.

“Magicians are the most honest people in the world. They tell you they’re going to fool you and then they do.”

Randi’s life story is told in the wonderful 2014 documentary, An Honest Liar, (YouTube) which recounts his rise to the top of the magic world. Randi broke Houdini’s escape records, but his real fame came as a scientific skeptic exposing frauds and fakes.

He discovered that psychics were using his magician tricks to swindle people and made 32 appearances on the Johnny Carson Tonight Show outing the spoon-bending tricks of Uri Geller and the phony faith healing of Peter Popoff. This debunking inspired the 1992 Steve Martin film, A Leap of Faith.

“No matter how smart or well-educated you are, you can be deceived.”

James Randi died on Oct. 20, 2020 at the age of 92. His legacy is a belief in science and critical thinking which is needed more than ever these days. He will be remembered as a crusader against fraudsters claiming supernatural powers.

Life comes full circle. Nightmare Alley was filmed at the R.C. Harris Water Treatment Plant (originally the Victoria Park Filtration Plant) just down the street from Randi’s first home. In 1928 the waterworks were still a dream in the eyes of Neville Park Boulevard resident R. C. Harris; a vision of clean, safe water for Toronto.

One hundred years ago today, Jan. 11, 1922, Leonard Thompson, a 14-year-old boy from my street, Pickering Street., became the first patient with diabetes to receive insulin injections. Science saved his life. To quote Randi’s good friend Carl Sagan, science is “a candle in the dark”.

“Those who believe without reason cannot be convinced with reason.”
— James Randi