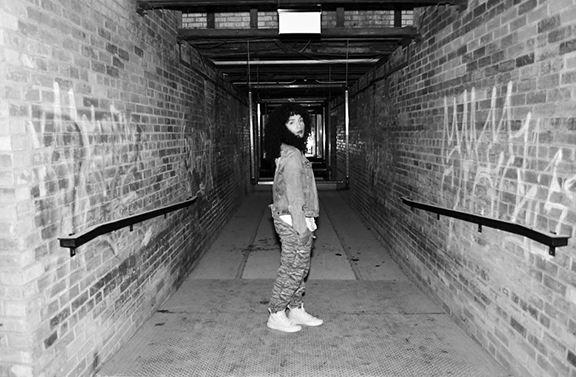 Kyara Tetreault, a Toronto native currently residing in Leslieville, blew away both judges and audiences with her unique sound and stunning performances on Alter Ego, a music competition show that ran on the Fox television network earlier this year.

The only non-American competitor, Tetreault, aka Seven (her digital avatar ‘Alter Ego’), was the show’s runner-up to winner Jake Thomsen, also known by his ‘Alter Ego’ Dipper Scott.

Fellow Canadian singer and songwriter Grimes was one of the show’s judges and shared in Tetreault’s, and fans, disappointment about Seven not winning Alter Ego. After Tetreault’s final performance and reveal, Grimes told her and viewers that she had been rooting for Seven to win the title.

“I was so flattered that she [Grimes] would say that,” said Tetreault. “I had worked so hard and changed everything to try to make it to the top. I was even singing while running on the treadmill.”

“So, just to hear positive feedback from her, not even that she wanted me to win which was an insane amount of validation… it’s just great to hear that what you’re doing is working and you’re on the right track.”

Growing up in Toronto, Tetreault spent a lot of time watching the iconic MuchMusic channel, and in music stores such as Sam the Record Man. These experiences allowed her to learn from genres including jazz, indie, blues, and hip hop and contributed largely to the unique sound she has today.

She now describes herself as a reminiscent artist, drawing from her experiences and using those experiences to tell stories through her art.

“I like being able to track my life through my music,” Tetreault said. “It’s like a timeline where I see where I’ve been and where I’m going.”

Though surrounded by music from a young age, Tetreault’s first memories of creating her own music are from when she was only nine years old when she would write poetry and record herself singing on her LG Cherry Chocolate flip-phone in the bathroom.

“My bathroom was kind of my sanctuary,” said Tetreault. “It turned into a place of escape, where I could document what was going on. I would record myself singing or write down my ideas… I had privacy so I felt really secure there.”

Since childhood, Tetreault’s vocal range has been very low, which led to bullying from her peers for not sounding like other girls. She shares that she was often teased for her deep voice, which also led to her being misgendered. Because of these experiences Tetreault decided to design Seven, her digital avatar for Alter Ego, as gender-fluid.

“I wanted Seven to be seen as kind of mysterious, yet captivating and exciting,” she said.

Seven did indeed captivate audiences, leaving viewers and judges in awe by the unique and haunting voice behind the avatar.

Though disappointed by not winning the competition, Tetreault is happy to be home in Toronto’s east end and excited to continue working on her musical career, with hopes of touring in 2022.

You can learn more about Kyara Tetreault on her website www.kyaraofficial.com

Her original music can be found on Spotify, Apple Music, iTunes, and Amazon Music