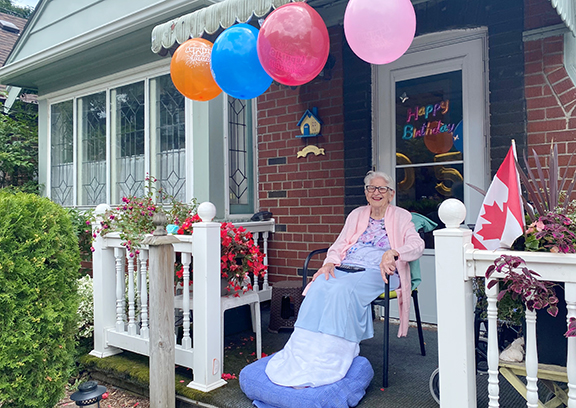 Bessie Stallworthy on her front porch for the outdoor celebration of her 105th birthday in July of 2020. Bessie died on Christmas Day at the age of 106. Beach Metro Community News file photos by Susan Legge.

Beloved Beach resident Bessie Stallworthy has died at the age of 106.

Tributes for Bessie, who has lived in the community and been a key figure at Kingston Road United Church since the early 1950s, have been flowing in since her death on Christmas Day was announced earlier this week.

“A true force of nature, she inspired many of us to be more thoughtful and kind to each other,” said Patty Morris of Bessie on the Kingston Road United Church Facebook page.

“We will never forget her from church youth group. What a great human being,” said James Riley.

“She lived a long and rich life,” said Marlene Noble. “She had a special gift of making everyone feel special. She is irreplaceable and will be dearly missed.” In July of 2020, community members turned out to celebrate Bessie’s 105th birthday at an outdoor event. Due to the COVID-19 pandemic, that milestone celebration saw residents wish her the best and gather on the sidewalk on her Kingston Road home while Bessie sat safely distanced and waved from her front porch.

It was pointed out at her 105th birthday celebration that COVID was the second global pandemic she had witnessed as she was a young girl during the Spanish Flu outbreak of 1918/19.

Stallworthy was born during the First World War, lived through the Depression and the bombings of London in the Second World War.

She and her husband Charles Field were married during the Second World War and had two children, Margaret and Ray. Margaret was born during the war and Ray afterwards.

The family came to Canada in 1951, and Bessie soon became actively involved with Kingston Road United Church and continued to do so for the rest of her life.

In 1969, Charles Field died of a heart attack. Bessie was fortunate to find love again with Phil Stallworthy and they lived happily together for 17 years until his passing.

Along with her service to Kingston Road United Church and the community, Bessie was also a Lifetime Member of the Girl Guides of Canada.

“Bessie is much loved by the women who found support in her single mom’s group in the 1970s,” said the story in Beach Metro Community News about her 105th birthday. “She has spent many a Remembrance Day talking at local schools and sharing her stories of life at war, survival and unabashed belief that all is possible.”

In a blog written by Bessie after her 100th birthday, she noted in 2017 that she had been alive for the first Remembrance (Armstice) Day in November of 2018, and had seen 99 of them since then.

“I realized this week that I had been celebrating 99 years of remembrance,” wrote Bessie in the blog. “The first remembrance was when the Armistice was signed on November 11th, 1918. I was three years old. We called it Armistice Day for a few years until after the second war then it became Remembrance Day.”

In 2016, at the age of 101, Bessie wrote about how happy she was to have friends visit and how important her involvement with the Kingston Road United Church was to her.

“I have a policy I encourage my friends to ring my door bell. I open my door and invite them in and make us some tea. I am not great with coffee but I will do that as well. The thing is they don’t get home baked goodies. I can’t stand up long enough to bake any more, but I always have cookies,” she wrote.

“The great part of entertaining is a bit of every one I meet rubs off on me. A bit of me rubs off on the person I am greeting as well. So we all grow a bit better than we were before we met. Having new experiences when my friends take me out, are also the great joys in my life. But the one thing I do rain or shine, I go to my church to be reminded That ‘God is!’ I then have confidence the next week will be a ‘Good’ week.”

Those interested in learning more about Bessie’s life can visit https://bessieat100.wordpress.com/

She was an awesome human being. She will be missed by many.