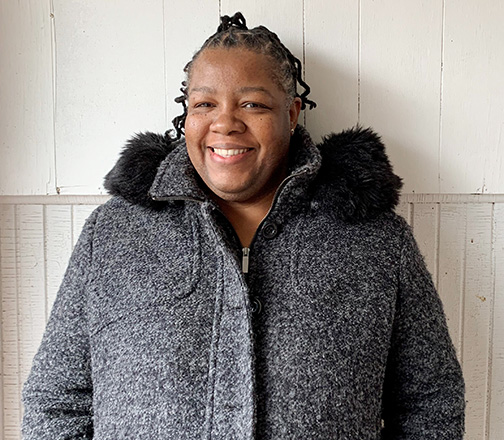 Beach resident Ingrid Palmer has overcome many challenges to reach her goals. Photo by Mimi Liliefeldt.

Last month we met Ingrid Palmer, a truly inspirational member of our community. If you haven’t read the first part of her story, we covered how Ingrid, a Black woman, grew up visually impaired (later diagnosed legally blind), a survivor of sexual abuse and went from foster care to living in a group home in her teens.

Today, Ingrid is the Director of Networks and Relationships at Toronto Neighbourhood Centres. TNC is a charitable organization that develops and delivers community services. According to the TNC website, the services “play a central role in fostering key characteristics of supportive communities, such as Inclusiveness, Opportunity, and Mutual Support.”

After graduating from high school, Ingrid went to Centennial College but in her first year she became pregnant with her daughter. When it was time to go back, she applied at York University and graduated with her BA.

Despite the top marks she earned, finding a job post university proved to be a challenge.

“I couldn’t get a job to save my life. I’d always done well at school and so that’s where my validation and pride came from. At that point in my life, I never disclosed my degenerative eye condition, my eyesight was always declining but back then it was much better. The last job I’d held at that point was the Delta Chelsea Hotel, I had to hold a lot of information in my head. I did a good job, but the one thing that always held me back at work was that I’d walk into things because of my tunnel vision, so that would always hold me back from promotions,” said Ingrid.

“When I became legally blind in my late 20s, I decided I wasn’t going to hide it anymore, it was really stressful. I had to be upfront but doing that was a death sentence for employability. My grades could not overcome the stigma of blindness. Employers started saying I was overqualified as an excuse, so after a couple of years I dropped my degree from my resume. And even then, I couldn’t get anything. When I started looking at jobs that were geared to persons with disabilities, that’s when I first discovered even there, people would rather you had a different type of disability, not blindness. Nobody wants a blind person working for them. I fell into a depression because being on social assistance was not supposed to be my life. I had a lot to give, I felt so wasted, I was supposed to have a good paying job and a great life.”

Ingrid decided to focus her attention on family. When her son was diagnosed with autism, she went to check out a model school that had the diagnostic kindergarten program that he needed. There she met Nancy Steinhauer who was the principal at the time.

“Before I even talked to anyone, I had already decided that I was going to refuse the placement because I didn’t like the location,” said Ingrid. “By the time Nancy had taken me on the tour and she finished telling me all the things she had done at that school, I thought, ‘I can’t wait for him to come here’! I knew the school was going to change his life, but what I didn’t know it was going to change mine too.”

The school hosted many learning programs for the parents of the school and Ingrid, a self-described, ‘lifelong learner’ attended almost every single one. But the most amazing thing the school offered was Ingrid’s opportunity to fulfill her passion for helping others by volunteering.

“Nancy encouraged me to try out for the school council, but I said, ‘No I can’t because the meetings are always held at night, and I can’t get there’. I’d said this before to other principals and that was always the end of it, but Nancy said, ‘Oh, I’ll give you a taxi chit so you can make it’. She opened up this avenue of volunteering for me. I’d always wanted to do it, but I wasn’t sure how. From there my volunteering kept snowballing. I started giving talks because I rediscovered my voice and my value.”

This small seeming solution of providing Ingrid with a taxi to be able to attend the school council meetings was the first step in changing the trajectory of Ingrid’s path. We spoke about the word ‘inclusion’ and how often it’s used, but what does it really mean? Ingrid said, “Kindness is a part of inclusion, but it doesn’t end there. It takes more effort and intentionality to create true belonging. How are people incorporated into the conversation? What impact is their voice having? Just having someone be there is not belonging.”

Through her multitude of volunteer positions and years of personal experience, Ingrid has a developed a deep understanding of how to truly make spaces more equitable and inclusive. And now because of her devotion to social justice she has met some key individuals that have helped elevate her and create opportunities for her success.

“At my volunteer work with PALS (Parent Advocacy Leaders) at MacAulay Child Development Centre they ended up hiring me to do staff training with them on anti-Black racism. Eventually I became their Equity Coordinator. I also applied to a program with the Centre for Independent Living Toronto, who had a disability media lab where they wanted to promote stories from persons with disabilities. I was also known for my volunteer work in the poverty sector with Toronto Community Housing. From there I got connected to the Maytree Foundation who also hired me to do some presenting around poverty and housing. Then I started volunteering at Right to Housing Toronto, which I’m still a part of. So I’m speaking on poverty and housing, education, racialized communities, disability and child welfare; I’m speaking on all my own intersectionalities, you can see why it’s my passion. It’s all connected,” said Ingrid.

All of this work and learning has finally culminated into manifesting Ingrid’s dream for herself, a full-time job with a salary worthy of her expertise.  “I made my first vision board ever and a month later I saw the posting for my job at Toronto Neighbourhood Centres.”

Through her work at Maytree, Ingrid was connected to TNC who hired her to do a presentation to their staff members on engaging marginalized communities. “They were so happy with that presentation that when this job came up they sent it out to their network and I saw it,” said Ingrid.

How Ingrid arrived at this opportunity is an incredible tapestry of dedication, determination and capability but even then, she had to overcome what society had instilled in her;  limiting beliefs in herself.

“Through my work with PALS, I met this woman named Irene who recommended this program called Up With Women that pairs marginalized women with a coach for a year to pursue their goal of becoming independent,” said Ingrid. “I got accepted. I was with my coach for the year that I was doing all this work, and I almost didn’t apply for the job. When I was reading the job description I was thinking, ‘Oh my god, I can do this job! I’ve been doing this for free for years’! And then I get down to the bottom and I see the pay scale and I think, ‘Oh, maybe I can’t do this because it pays too well’. My coach helped me unpack my limiting beliefs and prepare for getting this job. After a year of coaching this was the very last thing we did together.”

Ingrid loves her job at TNC. The journey she took to get here was not a straight line, it was a web of multiple networks.

She fully acknowledges that we don’t do it alone, and that though you may not know the good you’re doing, these important social programs and the individuals that take the time to invest in people do make an impact. She said, as only Ingrid can, “You’re planting a seed and watering it, but you don’t always get to see that flower bloom. You don’t always see the results of the work that you do but know that you are part of somebody’s growth process.”

We can all be part of that growth process. I asked Ingrid which of her many organizations she could direct me and our readers to contribute towards, her recommendations were: Up With Women (who she herself was a beneficiary) and Child Welfare PAC (a charity that advocates for a progressive child welfare system).

There is so much more of Ingrid’s wisdom that I wanted to share, but if we are to walk away from her story with anything, let it be this: The weight of being a Black woman who is legally blind, and a survivor of sexual abuse and the child welfare system has been at times unbearably heavy and discouraging, but through the intentionality of people who truly wanted to include Ingrid and help raise up a woman that was so clearly capable and passionate she has been able to achieve what we all deserve — a great life.

To read Part One of Mimi Liliefeldt’s conversation with Ingrid Palmer, please go to https://beachmetro.com/2021/11/16/black-lives-here-a-conversation-with-the-inspirational-ingrid-palmer/