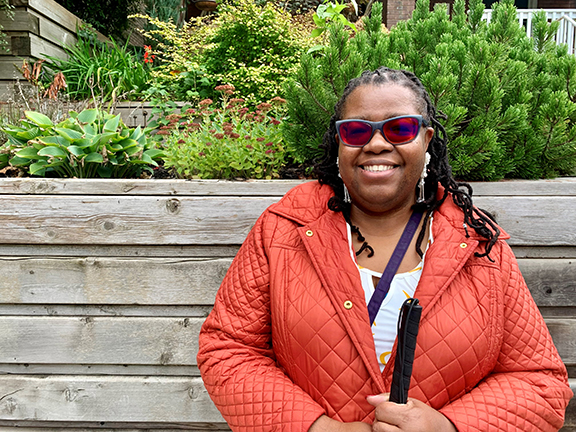 Beach resident Ingrid Palmer is the Director of Networks and Relationships at Toronto Neighbourhood Centres. Photo by Mimi Liliefeldt.

Every now and then, if you’re lucky, you meet a truly inspirational person. In the last year and a half, we have all been treading water, living with uncertainty, learning new ways of being, and frankly it’s been exhausting.

Most of us haven’t had the time or the inclination to think about what kind of energy we’re projecting, never mind being an inspiration for others.

This is what makes Ingrid Palmer so special.

A Beach resident, Ingrid is the Director of Networks and Relationships at Toronto Neighbourhood Centres. She is also a motivational speaker, an advocate for marginalized voices, and a facilitator of interactive and supportive workshops. Ingrid is also a mother of three, a survivor of sexual abuse, was a child of foster care and she is a legally blind Black woman who lives with hirsutism (look it up).

These titles and descriptions are not the full picture of Ingrid.

Before our meeting I Googled her (I highly recommend it). I was blown away by the videos of her award-winning speeches and rightfully intimidated that her storytelling is far superior to mine. But what unfolded is the true gift of Ingrid. She is open, confident, and funny. I immediately felt at ease and was amazed by her honesty and her inner strength.

Ingrid was born with Retinitis Pigmentosa, a group of eye disorders that cause progressive vision loss.

“I have a certain percent of ‘useable’ vision in the sense that I’m not 100 per cent blind. I can tell there’s light in certain areas, sometimes I can tell people are in front of me if I see the shadows. But basically, it’s a blurry world,” Ingrid told me.

She was diagnosed at 14. “As a child I had no idea that I saw differently than everyone else. I got glasses in Grade 3 and it helped immensely, but I was still bumping into things because I still had tunnel vision and no depth perception. But because I had the glasses people assumed I was attention seeking, nobody knew I had the other conditions. When I got into foster care and had social workers I eventually got diagnosed.

“When the doctor first gave me the diagnosis, I was happy! Vindication! I’m not crazy! I’ve been telling the truth! So, then I was asking, ‘What’s next? What do we do?’ And that’s when the bad news came. There’s nothing to do. There’s no cure. There’s no treatment. I went from a high to an instant crash. It was devastating.”

Ingrid is no stranger to challenges, but she has the strength and resilience to advocate for herself. Foster care was a way for Ingrid to escape the sexual abuse that began for her at 11 years old. When she finally spoke up at age 13, her truth was not accepted, and she chose to live away.

“It’s not uncommon when a victim of sexual abuse speaks up that they’re not believed. People have an image in their head of what an abuser looks like but as more of us speak up we know that’s not true. When it first happened, I convinced myself that it didn’t, until the next time. I was so young. I didn’t know how I could say those words to my mom, about someone we trusted. The longer you don’t tell you wonder how you’re going to explain the gap, and it goes around and around and then it happens again. You knew you were scared; you knew you felt like you had no choice, but you blame yourself. It’s unbelievable pressure.”

After a year of three or four foster homes with no success, Ingrid moved into a group home where she lived for four years from the age of 14.

“The last foster home I was placed in was with a white family in Pickering. They brought me back because they said they just weren’t comfortable having a Black person in their house,” said Ingrid. “The dad didn’t understand why I was crying. He said, ‘You’ve only been here for two weeks.’

After that I told my social worker that I’m not going back to anyone’s house ever again. He said I wasn’t street proof enough to live in a group home, but I was adamant; I was not going to be thrown out again.”

Though living in the group home had its share of negatives, Ingrid appreciated the stability it gave her, and she managed to push forward. School played a huge role in keeping her on track.

“School was the only love I had in life, I always loved learning and I did well in school. So, it became my lifeline,” she said.

When I asked how she was supported in school with her disability, she said, “They didn’t. Nobody told the school that I had this diagnosis. I had no accommodations or modifications made for me. And because I was embarrassed, I never told anybody. I always sat in the front, but could never see the board, so I had to learn to be a really quick writer and take the best notes I could.”

Through the years of living at the group home and going to school, Ingrid was fortunate enough to have had attachments to various staff and teachers.

“There isn’t just one person who made the difference in my life. I am truly a product of programs and services. There were a ton of people who left their fingerprints on my soul,” she eloquently stated.

Growing up the way Ingrid did forced her to wear the thickest of armours.

“I pushed everyone away. You would have to be really persistent to get through to me. But even then, there was the threat that people would leave. Every year your teacher changed. There was this constant connecting and disconnecting. It was painful and hard. But there were some people who would just get through,” she said, the last part making her smile.

One of the people that got through and changed her outlook on life was a friend she made at her summer job at the March of Dimes Camp for people with disabilities when she was 16 years old.

“I met so many amazing people but in particular, this man John who was completely paralyzed from the neck down. One day I was crying and telling him about my disability and how bad things happen to me, in turn he told me his story of how he became paralyzed. Him and his friend were trying to help a woman who was being sexually assaulted and it turned out it was the two of them against three men.

“The third man took a two-by-four and hit him over the head. I was so stunned. What a crappy price to pay for being a hero. And he told me, ‘You don’t have to choose to be unhappy. Life is what you make it’. That whole experience of working there that summer changed me. I was always in trouble at the group home before then, I came back a different person.”

Perhaps for anyone else to have delivered such a message, it would’ve sounded trite, but John had lived experience to bolster his opinion.

Ingrid came away from this and many other opportunities with more wisdom and sense of purpose.

Things could have turned out very differently for someone who was faced with so many challenges; but now Ingrid herself is a role model and advocate for countless others who live with and have to confront their own battles.

Ingrid’s story is beautiful, complex, and far from over.

There is so much more to share about this wise and witty woman, and so I will continue her tale next month so we can hear about her rise to positions of leadership and what she’s learned on the way.

Through my short time with Ingrid, I have already learned that there is so much more to a person than just what we see on the surface.

We all think we know this, but until you really talk to someone and ask the sometimes-awkward questions, you’ll never really know exactly how inspirational someone might be.

We all have something to offer, we just need to listen