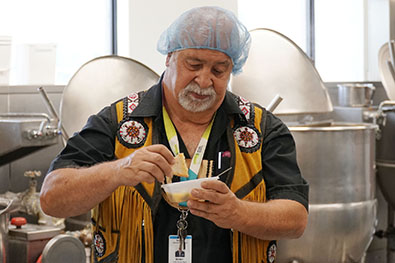 Michael Garron Hospital began offering Three Sisters Soup, made according to an Indigenous recipe, to patients this fall as part of an initiative to offer fresher and more local food items to its menu.

“Being able to serve that first bowl to one of my Aboriginal brothers was very honouring. When I asked him what he thought, he replied with the biggest smile and said, ‘This blow’s my moccasins off,’” said Elder Little Brown Bear.

Three Sisters Soup is made of several ingredients. However, the recipe is based on the combination of beans, corn, and squash.

Elder Little Brown Bear helped with the recipe for the Three Sisters Soup the hospital serves, and also emphasized its importance to the local Aboriginal community.

“There is an Iroquois (Haudenosaunee) legend about the three sisters, who were very different but are represented as loving one another very dearly and dwelling together in peace and unity as they relied on and helped each other grow strong,” said Elder Little Brown Bear.

“The beans, or the first sister, takes nitrogen from the air and uses it to keep the other sisters healthy, followed by corn, the next sister, that grows tall stalks that the beans can climb, holding the plants together and the last sister is the squash that grows big leaves that cover the ground, keeping weeds from growing and making the ground moist. The spiny squash also keeps away any animals that would eat the sisters. A garden of these three plants could provide a family with enough food to survive the winter.”

Three Sisters Soup is offered once weekly as part of the hospital’s meu, and is chosen by about 60 patients.

“We researched local, Indigenous recipes and came across Three Sisters Soup, a vegetable medley of corn, squash and beans. We consulted with the Elder who provided the recipe, which we’ve had to adapt for quantity cooking and to meet as many different diet codes as possible,” she said.

“Three Sisters Soup is a great option for us. When one is feeling unwell with poor appetite, a very common occurrence for hospital inpatients, a bowl of fresh, hearty, in-house made soup is its own medicine and source of healing,” said O’Connell.

“We also felt that the story behind the soup, the three main ingredients are planted together so each plant can support and nourish one another, reflected the team atmosphere of our department.  It was a perfect fit for what we were attempting to accomplish.”

O’Connell said the addition of Three Sisters Soup has meant a lot to members of the local Indigenous people and other hospital patients as well.

“To be honest, we were a bit overwhelmed with the response.  The Elder told us how culturally significant this soup is to the Indigenous community and we were humbled to learn this addition has meant so much to our Indigenous inpatients,” she said.

“We’ve also had many questions from our non-Indigenous patients.  They ask about the name and we share the story behind the name and of our collaboration with the Elder. It’s opened up great conversations and opportunities to learn about Indigenous culture.”

“I am so blessed to be working with Michael Garron Hospital, as it makes my heart dance just knowing that we have such a commitment from what I call my extended family here at the hospital. The gratitude that I feel has no words to speak of, just humbleness as we walk together arm and arm,” he said.