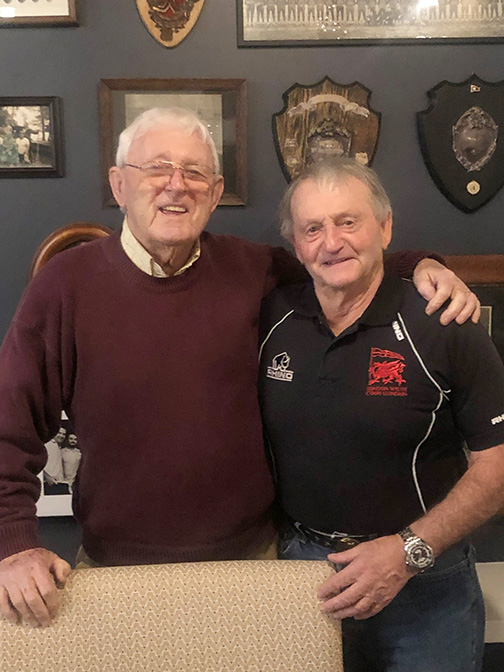 Alun Rees, left, and John Ackery, right, played on the London Welsh rugby team in England some 60 years ago. They were reunited recently during a meeting at the Balmy Beach Club. Photo: Brian Spanton.

A wonderful reunion took place recently at the historic Balmy Beach Club when two former rugby players who were on a team together in London, England, some 60 years ago met once again.

Beach resident John Ackery reunited with Alun Rees of Victoria, British Columbia.  The two last crossed paths when they both played rugby for the London Welsh in England some 60 years ago.

Both men have remained very involved in the game over the years, but hadn’t rubbed shoulders in six decades.

The two played key roles in their London Welsh days as John was a scrum half and Alun was his first receiver at stand off.

The historic rugby side located in the London Borough of Richmond upon Thames, was founded in 1885 and is famous for sending many players to both the Welsh National team and the British and Irish Lions.

It was a wonderful evening at the Balmy Beach Club on Nov. 25 with many stories told and friendships rekindled.