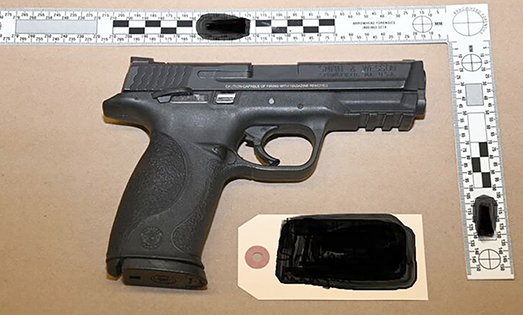 This loaded handgun was seized by Toronto police officers in 32 Division in March of this year. Photo: Toronto Police Service.

A number of Toronto NDP MPPs held a virtual press conference on Thursday, Nov. 18 to announce a bill that would enable legal action by the Province of Ontario against American handgun manufacturers.

The MPPs were joined by Regent Park community member Omar Abdelgawad, and Ken Price from Danforth Families for Safe Communities, a group formed after the Danforth Shooting that occurred in July of 2018.

According to a press release from the Ontario NDP Caucus, approximately 70 per cent of guns seized in 2018 by the Toronto Police Service were sourced from the U.S.

Tabuns said that he and the other MPPs are tabling a bill to take action against handgun smuggling into Ontario.

“Thousands of families across Ontario have mourned loved ones who have been tragically and needlessly lost to gun violence…There are many innocent victims whose lives will never be the same, who have suffered life-long injuries or deep emotional trauma, because of illegal guns on our streets,” said Tabuns.

“Our bill is a concrete way to start stemming the flow of illegal American-made handguns that are used for gun and gang violence.”

Berns-McGown said to deal with gun smuggling, the issue must be confronted from both sides of supply and demand.

“On the supply side, we simply need to do more to stop and stem the tide of illegal handguns into the country and we need to hold manufacturers accountable.”

Morrisson said that she recently met with the Regent Park Tenants Association who told her they were afraid to let their children play outside due to the repeated acts of gun violence in the neighbourhood.

“Too many families and communities across Toronto and Ontario have been absolutely devastated by gun violence. Too many people know that fear in their communities and the pain of losing loved ones. This bill will give Ontario more tools and the power to stop the flow of illegal guns from the source,” said Morrison.

Begum said the threat of gun violence continues to be an issue in her community and across the city.

“Gun violence is a complex and serious issue which is exacerbated further by neglecting the needs of our communities…We must work toward addressing the root causes of gun violence,” said Begum.

Abdelgawad said he joined the press conference to vocalize and support the bill because he believes it will help address the root causes of gun violence in his community and other neighbourhoods.

“Our community has been given bandage solutions to a problem has been systemic and ongoing for generations,” said Abdelgawad.

“Living in a community that’s experienced so much violence takes its toll. Every day we walk past the physical reminders of that violence – walls marked by bullets and bloodied sidewalks… It feels like our humanity doesn’t matter when the violence continues year after year. We need to end gun violence in neighbourhoods like Regent Park,” he said in a press release.

Price said the Danforth Shooting is as fresh to Danforth Families for Safe Communities as if it had happened yesterday.

His daughter Samantha was wounded in the Danforth Shooting of July 22, 2018 which took the lives of Beach resident and Malvern Collegiate grad Reese Fallon, 18, and Julianna Kozis, 10, of Markham.

“I’m sad to say that really nothing has changed since that incident occurred, and we continue to see the Toronto Police Service and other sources reporting that gun violence is still on the rise, and it’s something that needs public attention,” said Price.

“Our family knows firsthand the terrible experience of gun violence. We know it will take a variety of approaches to curb this violence – and particularly to tackle poverty and racism. In concert with those steps, we believe that this bill will be a useful step towards removing guns from our streets and protecting peoples’ lives,” said Price in the press release.

According to the release, the bill would require the Ontario Attorney General to investigate and initiate legal action against American gun manufacturers that allegedly facilitate the supply of illegal handguns into Canada.

The Attorney General would also be responsible for consulting with experts and affected communities to develop a legal strategy to mitigate the entry and sales of these guns.