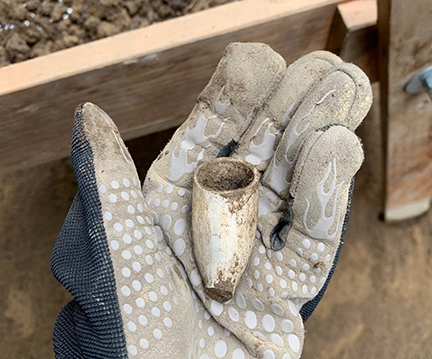 A clay pipe was among artifacts found during a dig on the Ashbridge Estate this summer and fall. Inset photos show ceramic fragments, work taking place on the dig, and an exterior of the Jesse Ashbridge House built on the Estate land in 1854. Photos: Submitted.

A recent archaeological dig has found the remains of a temporary shelter on the west side of the Ashbridge property that could have been the original shelter that the family lived in upon arrival.

In 1793, the Ashbridge family arrived in what is now Toronto from Pennsylvania. It was believed that they then built a log cabin on the east side of what is now the Ashbridge Estate property on Queen Street East between Greenwood Avenue and Woodfield Road.

However, historians have wondered where the family lived during the time consuming process of clearing the land in the area for farming and putting up permanent shelters. Archaeologists may have found the answer to that question, and they now believe the Ashbridges instead first lived in a temporary shelter whose remains were only discovered over the last few months.

“On the west side of the property, we were digging around two of the buildings. And on one side of one of the buildings we did find evidence that leads us to suspect that the story we’ve been telling about the Ashbridge family when they first arrived in the town of York in 1793 and made their way to Ashbridges Bay and then onto this particular site is not quite what we thought it was,” lead archaeologist Dena Doroszenko said.

“So now we think when the family arrived… that is Sarah Ashbridge and her two unmarried sons, her two married daughters with their husbands and families… they may have actually camped out until they built the log cabins and cleared the land for the other sort of lots that they were going to claim as they stayed in this location.” The main thing archaeologists found on the site included, “soil stains in the ground, which suggest that there may have been an early structure there in the 1790s. And the artifacts also sort of date to that late 18th century time period into the very early 1800s. So those artifacts are mostly ceramics, clay tobacco smoking pipe stems and bowls, some buttons and even sewing pins, and animal bone, in particular fish bone,” said Doroszenko.

“Ashbridge’s Estate has seen a lot of archaeology over the past 30 plus years. And we have been digging in the past, mostly on the east side of the property. We are planning some capital work on buildings, in terms of restoration and repair. And usually in advance of any work of that type on our historic sites, we do some archaeology to ensure that we’re not going to be disturbing anything that is archaeological. Because the Ashbridge Estate is a registered archaeological site with the Ministry of Heritage, Sport, Tourism and Cultural Industries,” she said.

“The structure we think that would have been constructed, was meant to be temporary, is sometimes refered to as a post in the ground structure. Where they would, you know, set up posts, build sort of a wood floor and wood sides but may have had a tent over it or canvas or something.” This most recent dig began in June and ended on Oct. 29. Over the winter months, archaeologists will process the artifacts that were discovered. This involves cleaning, analyzing, and cataloguing the artifacts.

Based on archaeological work, the earliest human activity on this site, which now sits at 1444 Queen St. E., was around 6000 B.C. Other objects on the site indicate Indigenous activity and presence from 500 A.D. until 1400 A.D.

When the Ashbridges arrived in 1793, they were among the earliest settlers east of the Don River.

In the mid 1700s, the Ashbridges were English Quakers living in Chester County, Pennsylvania. A father of the family, Jonathan Ashbridge died in 1782. As Loyalists, in order to flee political persecution, Sarah Ashbridge, the family matriarch, brought the family to what was then York, and is now Toronto, acquiring land and starting a new life.

As the family story goes, the Ashbridges came into what is now Ashbridges Bay in a boat. They had brought a conch shell which they then blew. At this point, thousands of birds emerged from the wilderness and bay. This indicated that that spot would be ideal for finding food.

The other necessity they would have had to check for is whether the land in from the bay would be ideal for farming. This is how the Ashbridges chose that spot to be their settlement.

They then set up farms as well as log cabins and claimed three lots.  In 1809, Sarah’s son Jonathan Ashbridge built a “Georgian style plank house”,” on one of the lots, when he got married. The selling of parts of the property began in 1918. And in time, Toronto spread around and into what had been the Ashbridges’ land.

At this point, the Ontario Heritage Trust has taken over the modest portion of land that is left of the Ashbridge Estate, which includes the Jesse Ashbridge House on Queen Street East which was built in 1854.