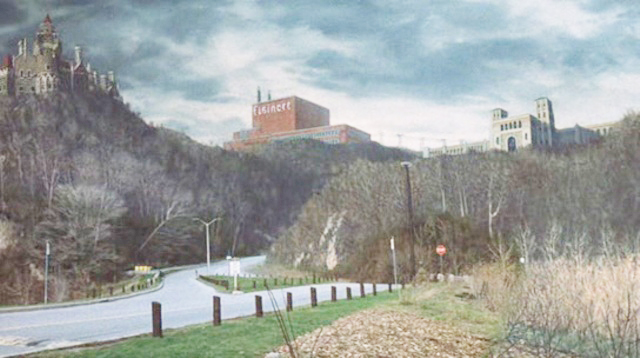 How did Casa Loma, the Hearn Generating Station and the R. C. Harris Treatment Plant all end up on top of the Scarborough Bluffs? You’d have to ask Bob and Doug MacKenzie from the movie Strange Brew.

We all have our “guilty pleasures”, especially during a long pandemic. Sometimes we just want to turn off our brains and laugh at dumb comedies like, well, Dumb and Dumber or Weekend at Bernie’s.

I’ve been watching Impeachment: American Crime Story about the President Clinton / Monica Lewinsky scandal of the late 1990s. As the situation is blowing up, Lewinsky tries to visit Clinton in his office but his assistant says he can’t be interrupted, he’s watching G.I. Jane with his daughter Chelsea.

How does a Rhodes Scholar react to a messy situation? During a convention speech in 2016 Bill Clinton confessed, “Truth is, we rarely disagreed on parenting, although she did believe that I had gone a little over the top when I took a couple of days off with Chelsea to watch all six Police Academy movies back-to-back.” Hillary-ous.

Here are the made-in-Toronto dumb dozen:

Police Academy (1, 3, 4) (1984 on). Even if the gags are groaners, it’s fun to watch for the Toronto locations such as Humber College Lakeshore Campus, Cherry Street Bridge, Silver Dollar Room, Riverdale Shopping Centre, Danforth at Luttrell Avenue and mayhem at Kensington Market.

The Adventures of Bob and Doug MacKenzie: Strange Brew (1983) is a low-brow “take-off” on Hamlet with no need to pull on your thinking toque.
Our favourite hosers beer up under pressure. If you don’t like beer jokes, take off, eh. How did Casa Loma, the Hearn Station and the R. C. Harris Treatment Plant all end up above the Scarborough Bluffs on Brimley Road?

Billy Madison (1995). An Adam Sandler film with scenes at Pioneer Village, Danforth Collegiate and the Parkwood Estate in Oshawa. Need I say more?

The Kids in the Hall: Brain Candy (1996) with a tasteful scene at Taylor Creek Park. Just kidding. No taste was harmed in the making of this film.

The Wrong Guy (1997). Dave Foley is also in this riff on The Fugitive if the fugitive was an idiot. Where else can you see Scarborough’s own Barenaked Ladies as singing cops?

Tommy Boy (1995) starring the late Chris Farley comes out on Netflix this month. Watch for scenes at the Distillery District at a time when it was still just old warehouses.

Half-Baked (1998). Harland Williams (son of Lorraine Williams, author of Memories of the Beach) goes to jail for feeding junk food to a diabetic police horse. The prison is R.C. Harris which also is a location for Undercover Brother (2002).

Harold and Kumar Go to White Castle (2004) pretends to be New Jersey, but it’s Toronto (U. of T., Scarborough, Pickering).

Dishonourable mention goes to The Love Guru (2008) with a village at Scarborough Bluffs. It takes an idiot to raise a village, but the Leafs do win!

Watch these movies with your family and try to explain the jokes.