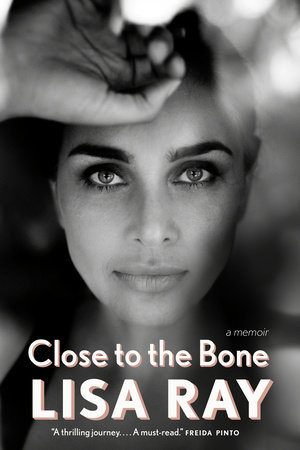 Cancer touches all of us, but it can be beaten. Thousands “stood up” to cancer with the Terry Fox Run and the Weekend to Conquer Cancer.

With Thanksgiving weekend upon us, it’s a good time to remember small miracles like a healthy “cancer graduate” Lisa Ray taking part in the This is Our Shot campaign.

Like COVID-19, cancer doesn’t care if you are young or old, rich or poor or a glamorous movie star like Lisa Ray.

The Toronto-born supermodel in India, “accidental actress”, TV host and yoga teacher can now add author to her resume with her very personal memoir Close to the Bone.

In June 2009 Ray was diagnosed with multiple myeloma, a rare, incurable cancer that attacks the plasma cells inside bone marrow. That September she announced her condition from the red carpet at TIFF (Toronto International Film Festival).

I remember seeing Ray and co-star Don McKellar arrive by rickshaw at Roy Thomson Hall for the premiere of Cooking with Stella. Ray also starred in Bollywood / Hollywood (2002) and the Oscar-nominated Water (2005).

I met Ray and her father that fall during a MM (multiple myeloma) Walk “Moving Together for the Cure” to raise awareness and funds for research at Princess Margaret Hospital.

She was down-to-earth and upbeat. Our team went to lunch after the 5K walk and she was concerned that everyone else was doing well and had enough to eat!

The good news is that Ray received a stem cell transplant that saved her life. Her cancer is now in remission and she is living in British Columbia with her husband and twin daughters.

Close to the Bone is the story of a restless spirit facing triumph and tragedy.

Ray became a famous model in India in 1991, the same year her mother was paralyzed in a car accident. She writes that “all that attention came at a price” as “impossible beauty standards” led her to eating disorders: “Somewhere, somehow the pursuit of perfection has lodged itself in my very marrow.”

One time in India she overheard two men describe her looks as “okay, but she’s no Lisa Ray”.

Her “identity was built on fantasy. The real me could never measure up to the imaginary me.”

“Whatever I was, it was never good enough.”

She recalls, “Jumping from one thing to the next – one place, one lover, one job – had been my life.”

After living all over the world, Ray came back to Toronto in 2007 and bought a “quirky” condo on Queen Street East across from The Beacher Café.

“I loved taking walks along the Boardwalk and ached to get a dog.” She remembers Meat on the Beach and Licks, both now gone.

One fascinating tale is Ray’s audition with Daniel Craig for the role of Camille in Quantum of Solace (2008). Maybe “Bond Girl” was not the path she wanted to take anyway.

Lisa Ray looks back on “the emotions of a life lived close to the bone.”

“How fortunate a thing is, when life alters you without warning,”

She muses, “This is another side effect of cancer: it forces you to appreciate what you have, to live in that elusive present I’d been seeking so long. It bestows the gift of gratitude.”

This Thanksgiving we can be grateful for our health providers, our medical researchers and for wonderful people like Lisa Ray.