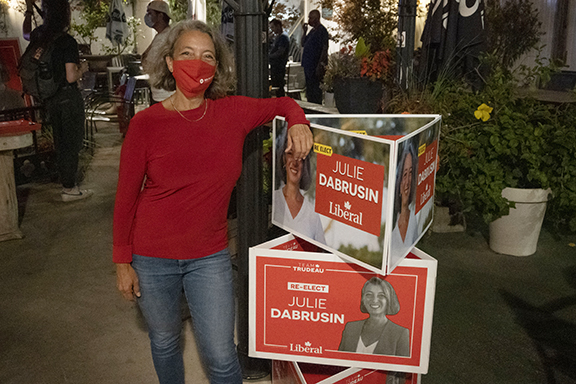 Liberal incumbent MP Julie Dabrusin is ready to roll up her sleeves and get back to work after winning her third term in the Toronto-Danforth riding.

The NDP candidate, Clare Hacksel, received 9,499 votes (for 32.8 per cent of the vote) putting her in second place.

In third place was Michael Carey, the Conservative candidate, with 3,939 votes (for 13.6 per cent of the vote).

On running in a snap federal election called in the middle of August, Dabrusin said it felt like “a bit of a marathon” but credits the hard work of her team for knocking on doors and helping bring the victory home.

Toronto-Danforth, which was the riding of late NDP leader Jack Layton, was a mainstay for the NDP until Dabrusin won in 2015 in a tight election against the then NDP incumbent candidate Craig Scott.

She told Beach Metro News that the key to winning the riding and keeping it for three consecutive elections has been to always listen and make sure she responds to what the community wants to see.

“I think that the people in this community really care about seeing continued action on things like climate action, affordability, reconciliation,” she said.

Despite the election, however, the Liberals will remain a minority government which has left many voters wondering if the election was worth it.

Dabrusin said she believes it was.

“I think it was really important that we actually take this moment to hear from Canadians about what they wanted to see as part of the rebuild,” she said. “A lot of really important decisions are being made right now about how this country goes forward out of what was a monumental change for all of us.”

As Dabrusin looks forward, her top priorities include climate change and modernizing the Canada Environmental Protection Act, supporting artists through copyright modernization, and continuing to work on reconciliation.