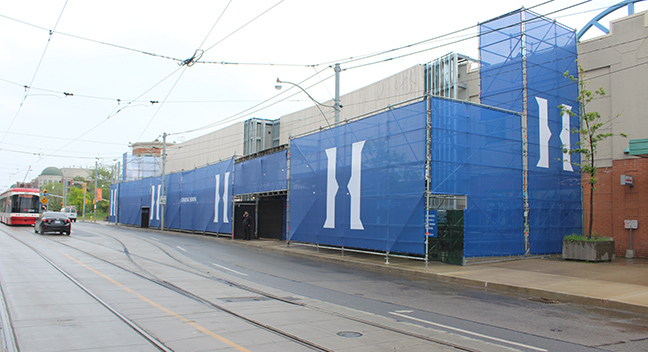 The History concert and entertainment venue will be located at 1663 Queen St. E.

Beach residents will have an opportunity to learn more about, and share their concerns regarding, plans for the History concert and entertainment venue planned for Queen Street East at a community consultation town hall meeting set for Monday, Sept. 13.

“The town hall is an opportunity for the community to meet some of the key stakeholders behind History and provide some more details surrounding any questions or concerns,” said Steve Biasutti, general manager of History.

“We are really looking forward to working with all the community members in the Beaches and bring a world class concert venue to the area.”

The History concert venue will be located at 1663 Queen St. E. (between Coxwell and Eastern avenues) in the former site of the Champions off-track betting facility.

The 2,500-capacity venue is being created by Live Nation Canada in partnership with Drake.

News of History first became widely known earlier this year, and since that time there have been a number of community concerns raised regarding the planned venue.

Cindy Cass, who is a Beaches Neighbourhood Watch representative and also administers the local Facebook page for the community on the site of the former Woodbine Racetrack which is often referred to as Pleasantville, outlined some of the concerns being expressed by residents.

Those concerns include parking, traffic, crowds and noise, safety, and litter, she said.

“Although there have been some major concerns, most people are excited about the venue and thankful for the opportunity to bring more people to our area, who in turn can help other businesses overcome their losses during COVID. In short, the Beaches community looks forward to History and wishes them much success,” said Cass in an email to Beach Metro News.

She also provided more detail on some of the specific community concerns in her email which also sent to History representatives.

Regarding parking, Cass said residents are worried that once the Green P lots in the area are filled up there will be illegal parking on neighbourhood streets. Parking is already a major problem in the area on busy summer weekends, she said.

“How will you encourage people to park in the lot and not on the streets?” Cass asked History. “Our neighbourhood requires a sufficient number of tow trucks to tow all illegally parked vehicles. Ticketing cars are not enough. Will you be providing extra enforcement including friendly towing for the vehicles that park in the no parking zones.”

Traffic in and out of the Beach is already a challenge, said Cass, and she asked if History would be taking measures to deal with anticipated increases once it opens.

“Anticipated traffic problems with the opening of History require serious attention,” she said. “Will you be working closely with police and the bylaw department to direct the traffic flow when entering or leaving the parking lot?”

Residents were also concerned about past incidents in which people waiting for taxis or Ubers were sitting on the porch furniture of area residents. “With the higher number of people leaving the concert, will there be a designated area for people waiting for their Ubers or taxis?” she asked History.

Co-ordination with public transit for people coming to and leaving concerts in the area will also be needed, Cass added.

The community is also very concerned about the impacts of large crowds and noise associated with concerts, she said.

“The large parking lot directly across from Northern Dancer Boulevard lends opportunity for continued and potentially disruptive party energy. What preventative measures will be taken to control the disruptive behaviour if it exists?” asked Cass of History.

She said that on the issue of public safety, the community has a number of concerns.

“Will you be in partnership with the police and bylaw officers or are you intending to hire private security to ensure that security measures will be taking place before and/or after the show?”

“That will include discussion on noise and managing groups of visitors coming to the site. As the local councillor I’ll also be listening and watching closely at the meeting and in the coming months to understand and respond to any other impacts on things like local TTC service,” said Bradford in a statement to Beach Metro News.

He added that a concert venue such as History will be a boost to the city’s music scene, and is an important investment in the East Toronto area.

“Like any sector of the economy, we know that it’s so important to have a diverse, extensive infrastructure in place for a city’s music scene to thrive. This venue is going to contribute to the local community and the economy as a whole. The leadership at History have already made commitments to also providing their space for community organizations and events as part of their efforts to give back,” said Bradford.

“All of that said, the operators have to strike a balance and make sure they’re accountable and responsible for the venue operating well. So far we’ve had every indication that this will be the case but we’ll only know once History opens.”

Those wishing to be part of the Sept. 13 virtual town hall on History, which takes place from 5:30 to 7 p.m., can stream the meeting on You Tube at https://www.youtube.com/watch?v=WL0qC8MlsgY