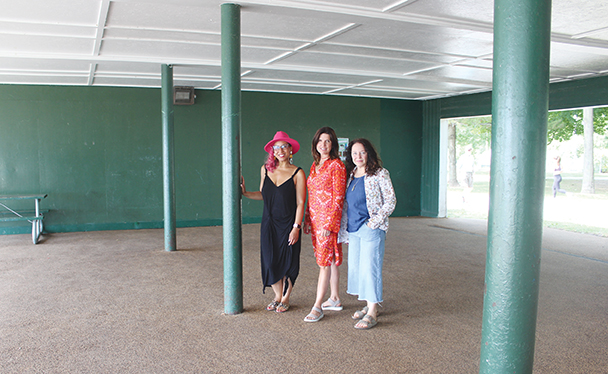 From left, Sapphira Charles, Lisa Rochon and Ginetta Peters at the Leuty Boathouse. A mural arts project for the inside walls of the boathouse featuring works by Chief Lady Bird and Jacquie Comrie begins this week. Photo by Alan Shackleton.

The Leuty Boathouse in the Beach is slated for an art reinvention this month when BIPOC artists Jacquie Comrie and Chief Lady Bird start painting and spray painting epic murals on the boathouse’s interior walls.

The Leuty Boathouse mural project’s inception was driven by a jury of three women: local architect and founder of the Beachers for Black Lives Movement, Sapphira Charles; Ginetta Peters, a landscape designer who also works with the David Suzuki Foundation; and Lisa Rochon, an urban designer and author who has juried many Winter Stations’ competitions, and collaborated with Indigenous womxn artists and designers to create the Red Embers installation.

All members of the jury are long-time friends and collaborators with Friends of the Beach Parks, a group of local residents dedicated to enhancing and animating parks in the area.

Rochon, who spoke on behalf of the other two jury members, said that the process of getting the Leuty Boathouse project off the ground started after they met last summer to discuss and research the boathouse and its 100-year history.

“We were all aligned from the beginning, so the process has been very seamless, it seems. It’s certainly required a lot of work but it was quite delightful in the beginning stages,” said Rochon.

The three reviewed mural artists’ portfolios with the help of STEPS, and the jury unanimously agreed to select Chief Lady Bird and Comrie for the project.

The team applied for funding from Street Art Toronto, (StART) a suite of programs that aim to make city streets beautiful by showcasing local artists, mentor emerging talent, and reduce vandalism and replace it with “vibrant, colourful, community-engaged street art.”

“There was a great alignment from the beginning between Sapphira, Ginetta, and I, and an amazing sense of collaboration between Jacquie and Chief Lady Bird. They were highly enthusiastic…Every person and agency has been absolutely fully endorsing and enthusiastic about the mural project, including the City of Toronto and Parks and Rec, even at a local level,” said Rochon.

Throughout the COVID-19 pandemic, the Beach neighbourhood saw an increase in foot traffic as Toronto residents sought out nature and exercise with the lake as a backdrop.

Charles, who led #blacklivesmatter marches in the Beach last year following the violent death of George Floyd, said in a press release that “Creating safe spaces where all people feel a sense of belonging is vitally important for mental wellness and self-esteem.”

Comrie’s work features the use of vibrant colours and shapes that breathe life into her art.

She said that “Colour is the universal language of human emotion. It is scientifically known to positively affect brain function, emotional and mental health.”

Chief Lady Bird, an OCAD graduate and a Chippewa and Potawatomi artist from Rama First Nation and Moose Deer Point First Nation, described her work as “continually shapeshifting… an exploration of self-love, lateral love, ancestral love,” in a press release.

Rochon said both artists have been thinking about the project and the Leuty Boathouse murals for several months.

“We wanted to showcase the talents and work of womxn artists in a high-profile place in the Beaches, but equally we wanted to educate and enlighten about Indigenous culture and the need for mental health awareness. It’s not really about being heavy-handed about those messages but to engage people through art, to listen and allow other cultures to be heard. It’s a way of seducing people into greater knowledge and education about Indigenous and Black culture,” said Rochon.

She said that OCAD graduate and Matthew Tribe was specially selected to prime the walls as a way to bring an aspiring muralist into the project. The primer paint is sponsored by Dulux Paints.

Rochon said the murals are the first phase of the project, and the second phase would entail the painting of the structural columns and upper valences of the Leuty Boathouse.

“For too long, the voices of Black and Indigenous peoples have been absent from public art in the Beaches and many other Toronto neighbourhoods. The Leuty project is about challenging convention to put powerful BIPOC creatives out front for a change,” said Rochon.

Painting of the murals will begin this week.

There is a mentorship meet-up slated for Friday, Sept. 10 at 11 a.m. on site at the Leuty Boathouse for aspiring muralists with Comrie and Chief Lady Bird.

Charles, Peters, and Rochon said they are “thrilled to champion the powerful public art of Chief Lady Bird and Jacquie Comrie, both are immensely talented art stars.”

The unveiling of the murals is slated for the afternoon of Sunday, Sept. 12, at approximately 3 p.m.

Everyone is welcome to come to the unveiling ceremony and celebrate the completion of the mural project.