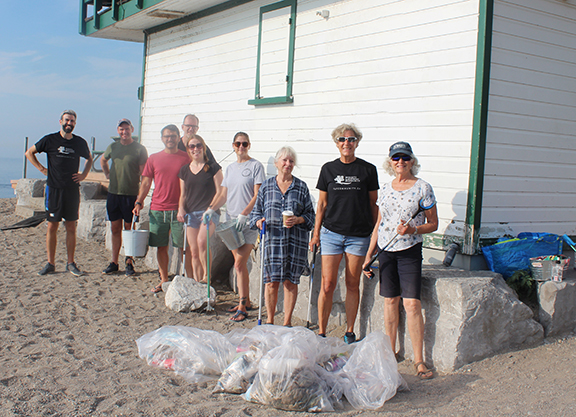 The Toronto Lakefront Community (TLC) hosted a Sweep and Swim event last Sunday. Here they show some of the bags of litter collected from local beaches that morning. Photo by Alan Shackleton.

The Toronto Lakefront Community (TLC) hosted a special Sweep and Swim event on the local beaches around the Leuty Lifeguard Station on Sunday, Aug. 22.

In April, TLC spearheaded a month-long cleanup in response to the increased traffic in the area and the consequent increase in litter.

Since the May 24 long weekend, TLC has performed regular beach cleanups every Sunday from 7 a.m. to 9 a.m. starting at the Leuty Lifeguard Station

The Sweep and Swim event was an opportunity for volunteers to clean up the beach and to enjoy a swim in the lake afterward to celebrate their hard work.

Dora Attard, Founder of Plastic Free Beach, also joined forces with TLC for last Sunday’s event. She also organizes her cleanups on Sundays from 8 a.m. to 10 a.m. starting at the Summerville pool and working her way west.

On Sunday, Aug. 29, from 8 a.m. to noon, Attard will displaying an art installation she made from collected cigarette butts along the local beaches this year. The installation will be by the Summerville pool at the foot of Woodbine Avenue.

Jane Anderson is the founder of TLC, and she said combining the cleanup with a swim afterwards made sense for the many people who come out and help collect litter each Sunday morning.

“I thought to combine it with a swim because we have quite a large swimming community in the Beach…We’ll do a beach cleanup and then we’re going to all jump in the lake. It’s to raise awareness that people need to be environmentally conscious and not litter,” she said.

Anderson said the cleanups that TLC also conducts on the southwest Scarborough shoreline, east of the R.C. Harris Water Treatment Pant, are an effort to help the City of Toronto’s parks department keep the beaches clean following an increase in large parties and raves.

Anderson said that as a swimmer and someone who does water quality monitoring, she’s conscious and sensitive about keeping the lake clean.

She said that cigarette butts are the most common type of litter they find during weekly cleanups, despite smoking being illegal on beaches under the Smoke-Free Ontario Act.

“Cigarette butts are particularly bad since they are made of microplastics, and they don’t biodegrade, and often end up in the lake. People don’t seem to recognize butts as litter, but they are the number one thing we find on the beach,” she said.

Anderson said that a longer-term solution would be for people to lobby for cigarette companies to produce more eco-friendly or filterless cigarettes. However, she said smokers can take other steps to curb butt littering.

“You can take them with you, you can buy a personal ashtray, all the recycling bins on the streets have places to put cigarette butts…In the smokers’ defence, I don’t think there’s a lot of places to put butts along the Boardwalk. I think we need some proper disposal containers,” she said.

Anderson said that TLC hopes to educate the public on the harmful effects of litter and cigarette butts through the cleanups and their #kicktheflick campaign on Instagram.

“It seems beaches (in Toronto) are a popular place for parties and raves, but they result in lots of beach litter and garbage, which affects wildlife and potentially the health of the lake,” said Anderson.

Anderson said that while she understands these parties and raves are likely to continue in the Beach and other Toronto beaches and parks, she hopes that attendees will make efforts to not litter by taking trash with them and disposing of it in proper receptacles.

To learn more about TLC and their cleanup efforts, please visit https://www.tlfcommunity.ca/