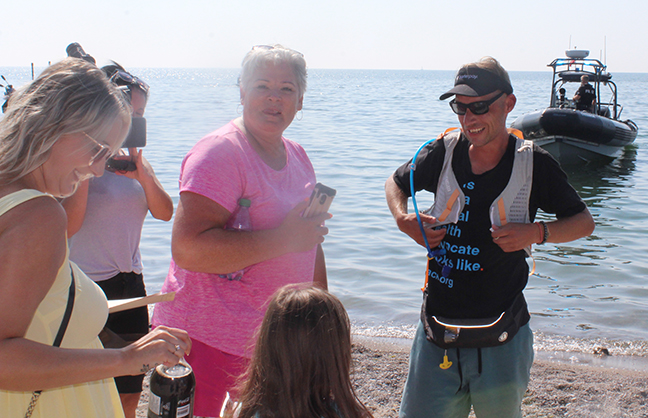 Mike Shoreman is welcomed by supporters at Kew Beach on Tuesday, Aug. 24, morning. Shoreman did not succeed in his attempt to become the first disabled paddleboarder to cross Lake Ontario internationally from the United States to Canada this week due to high waves and winds this morning. Inset photos show Shoreman arriving on the beach after paddling in from his support boat, and speaking to media. Photos by Alan Shackleton.

Mike Shoreman may not have achieved his ultimate goal of becoming the first disabled paddleboarder to cross Lake Ontario internationally from the United States to Canada this week, but he helped raise awareness and tens of thousands of dollars in funding for youth mental health issues and anti-bullying efforts through his attempt.

And he vowed he will be back next summer to make the crossing a reality.

Shoreman had to abandon his plan to cross the lake entirely on his paddleboard due to extremely high waves and an overwhelming headwind early on the morning of Tuesday, Aug. 24, that made it impossible for him to carry on in the water.

Instead, he paddled in from his nearby support boat with an escort from the Toronto police Marine Unit up on to the sand of Kew Beach just before 11 a.m. He had started his lake crossing in Rochester, New York on Sunday of this week.

He was greeted by an enthusiastic crowd of supporters.

Upset that he had not been able to achieve his goal, Shoreman said he learned a lot on this first attempt to do so.

“This lake is a big thing,” he said as he spoke to reporters and well-wishers shortly after making his landing on the beach. “This was the first but not the last attempt by a person with a disability to cross Lake Ontario.” The conditions on the lake this morning, though, were just too much for Shoreman to continue.

“It was like being in a washing machine. Up and down, and pushing me backwards,” he said.

“There were things we just could not have planned for. The dream has been put on hold…It was an incredibly challenging venture. I will be back. We are not done here.”

Shoreman is an experienced paddleboarder and was named the 2021 International Stand Up Paddleboarding Man of the Year, the first Canadian and person with a disability to be so honoured.

Prior to coming down with the neurological condition Hunt Syndrome, which is a shingles variant that attacks the inner ear, he was considered one of Canada’s top paddleboarders and ran a company in Toronto. His illness caused partial paralysis of his face, and led to vision, speech, taste, hearing and balance (vertigo) problems.

Since that happened, Shoreman has worked hard to re-train his brain and body to be able to paddleboard once again.

“I was told by doctors I would never paddleboard again. I refused to accept that diagnosis,” he said. His attempt to cross the lake this week was made in partnership with jack.org, a Canadian charity working to train and empower young leaders to revolutionize how mental health is viewed and treated; and American organizations the Tyler Clementi Foundation and The Trevor Project.

From a fundraising and awareness perspective, Shoreman’s crossing attempt was a huge success.

Shoreman said his message to young people dealing with mental health challenges is that they are not alone, much as he was not alone while on the lake as his support team was there to help him every inch of the way and there was a crowd of supporters and friends waiting on shore to welcome him.

“To all the youth I want to say you are not alone. We are all here for you. The journey has just begun,” he said.

For more information on jack.org, please go to https://jack.org/Home

For more information on the Tyler Clementi Foundation, please go to https://tylerclementi.org/

For more information on The Trevor Project, please go https://www.thetrevorproject.org/