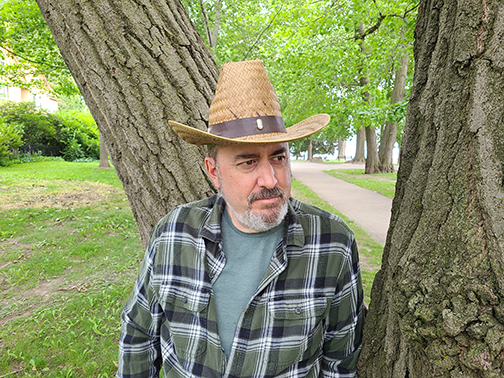 Sean Fisher recently filmed the video for his song Never Thought I'd Never (See Your Face Again) in the Beach. Photo by Jamillah Ross.

Local resident Sean Fisher, together with his wife Jamillah Ross, recently produced his latest music video in the Beach for the song Never Thought I’d Never (See Your Face Again).

The song was inspired by the year of the COVID-19 pandemic and channels the isolation and loneliness people have felt while being separated from their loved ones, or having lost loved ones to the pandemic.

Ross, an accomplished Canadian actress known for her roles in Kim’s Convenience, The Handmaid’s Tale and Killjoys, to name a few, has been gradually breaking into writing and directing.

Fisher began his music career in Calgary with the Alberta Recording Industry Association and grew up watching artists like k.d. lang.

Although country isn’t the main style of music he creates, this song naturally fell into that realm.

Eventually he went into musical theatre and comedy here in Toronto. He’s worked as musical director at Second City and Bad Dog Theatre, through which he met Jamillah.

Other productions Fisher has worked on include Show Stopping Number! The Improvised Musical, which won a Canadian Comedy Award and Best of Fringe, The Ding Dong Girls and, his own musical, A Freudian Slip of the Jung.

In his music video, Beach residents can see familiar locations such as the walkways along Glen Major Ravine and, more notable, the bandstand in Kew Gardens which has largely gone unused over the last year.

“That was a place where people would play music but it’s empty so it brings a little bit more of the theme of loneliness to the video,” he said.

The couple used to live in the west end, but when the opportunity arose to relocate, Fisher immediately chose the Beach.

“You just cannot beat the natural beauty of this area. For filmmakers it’s just perfect,” he told Beach Metro News. “Just about anything you want to film you can find something around here that will suit that”

One interesting point he mentions about the video is that it was filmed at twice the speed of the song and slowed down in post-production to give it that slowed down, somber effect which compliments the tone of the song.

The song is now available on iTunes as well as Spotify, Apple Music and all streaming services.