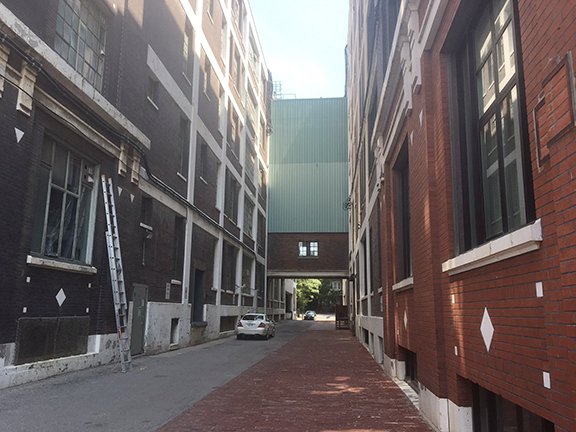 An alley running off the east side of Carlaw Avenue between Dundas and Queen street gives a glimpse of the area's industrial history. Historic plaques and the Wrigley Co. sign are shown in inset photos.

Have you ever walked through your neighbourhood and wondered what the story behind that old factory was before it became lofts and office spaces?

Heritage Toronto, along with Toronto-Danforth Councillor Paula Fletcher, has organized a virtual walking tour of the Dundas and Carlaw area, the first of its kind in the city.

Fletcher said it’s the first large installation of plaques in one place where you can do a digital tour.

“I think it’s very exciting and I’m so pleased that so many people are interested in taking that tour and learning about the industrial heritage of that area,” she told Beach Metro News.

Allison Bain, Executive Director at Heritage Toronto, is also especially proud of the project and grateful to Fletcher for helping to make it possible.

According to Bain, the team at Heritage Toronto spent two years building the tour and collecting dozens of first-hand accounts from locals who lived and worked in the area while it was still an industrial powerhouse.

“For this tour, we also produced 11 new plaques, printed 5,000 brochures sent to local businesses, and the online tour has been visited by over 8,000 people to date,” she said. The tour features a large installation of plaques that residents can find along a route that highlights the neighbourhood’s role as the industrial engine of Toronto throughout the 1900s.

Starting at Queen Street East. the tour and heads north veering on and off of Carlaw Avenue, passing historical buildings and intersections, before finally wrapping up at Gerrard Street East.

The interactive tour features vintage photos of the neighbourhood and explains some of the changes the area has undergone over the last 100 years.

Readers are encouraged to use the digital walking tour as a companion as they follow the route on the website and see, first hand, the historical buildings that give the neighbourhood its charm.

Before settlers arrived, the area was home to Wendat, Haudenosaunee, and Anishinabee Indigenous peoples. Eventually, it would be sold to the British Crown as part of the Toronto Purchase treaty in 1805. As industry began to pick up momentum at the beginning of the 1900s, the manufacturing plants that opened around Carlaw Avenue became the driving force of Toronto’s economy.

Due to its close vicinity to the water and railroad network, this area was the perfect location for the manufacturing of goods that would be sent as far as Mount Everest.

Around the middle of the century, an estimated 25 per cent of Toronto’s population worked in manufacturing.

Because there were so many manufacturing jobs in the area, it wasn’t uncommon for entire families to be employed in the same neighbourhood that they lived in.

Throughout the tour, residents will have an opportunity to compare old photos on their phones to the neighbourhood they see today to discover just how much things have changed.

“Ghost signs”, those faded signs we see on the sides of buildings, also make a number of appearances throughout the tour. From the Colgate-Palmolive Building, which drew the ire of many residents for the smell it produced, to the Reliable Toy Factory where Reliable Fish and Chips got its name, the tour is full of little known information about things we see every day in East Toronto.