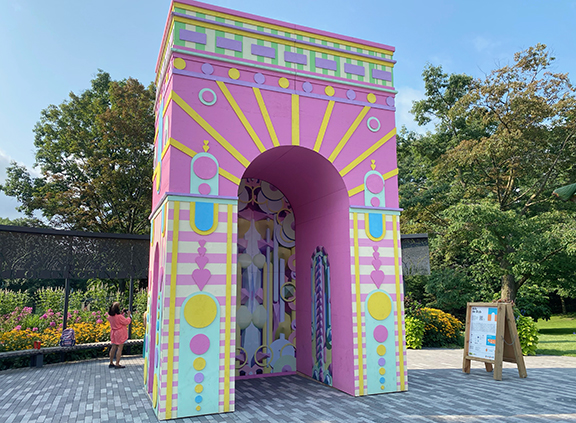 The 'ARc de Blob,' now up in front of Kew Gardens on Queen Street East, is one of three Summer Stations art installations set to be on display in August in the Beach. Inset photo shows an image of seashell-shaped The Epitonium, which will be displayed at the north end of Woodbine Park by Queen Street East. Photo by Susan Legge.

Winter Stations along Woodbine Beach has become Summer Stations in the Beach.

The transition began this week when the ‘ARc de Blob’ art installation made its appearance on Queen Street East at the entrance to the Beach’s Kew Gardens park.

The installation is a joint effort by an Austrian and British design team made up of Aleksandra Belitskaja, Ben James and Shaun McCallum. ARc de Blob’s designers describe it as “a colourful landmark, a point of orientation, interaction and refuge.”

However, due to the increasing COVID-19 case numbers earlier this year, the event had to be altered to the point that no art works were installed along Woodbine Beach this year.

Instead, Winter Stations organizers made the best of the rapidly changing situation by displaying the winning art installations in other locations in Toronto, including the Distillery District, in the spring.

They also changed the name from Winter Stations to Spring Stations; and now finally to Summer Stations for the ARc de Blob, The Epitonium, and a third installation (to be determined) in the Beach.

The Beach BIA, with support from The Richards Group, and Winter Stations are presenting the art installations until Aug. 31.

The ARc de Blob is already in place, and thanks to a contribution from The Richards Group, two more stations are coming to Queen Street East — The Epitonium in Woodbine Park, and the third yet-to-be determined installation which is set to be completed by next week when Summer Stations officially launches. It is described as a “giant seashell” in harmony with its location. “It’s a beautiful and functional landscape. The creation of this idea causes natural shelter to become a refuge. The design of this structure is inspired by epitonium, which is a type of seashell,” said its designers.

The Epitonium’s installation is pretty well complete as of this week and it is located at the north end of Woodbine Park near the Queen Street East entrance.

For more information on the art installations that were selected for this year’s Winter Stations, please see our earlier story at https://beachmetro.com/2021/01/22/winter-stations-2021-winners-named-but-exact-date-of-exhibition-on-woodbine-beach-yet-to-be-determined/

For more information on Summer Stations and The Beach BIA at Kew Gardens and Woodbine Park, please go to https://winterstations.com/ which will have full details up on the website next week.