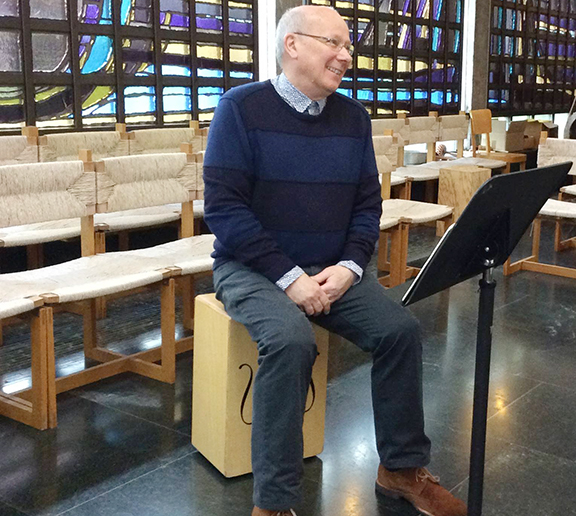 Beach resident Andrew James Donaldson has been honored by The Hymn Society in the United States and Canada during its virtual Annual Conference earlier this month by being named a Fellow of The Hymn Society (FHS), the Society's highest honour. Photo: Submitted.

Beach resident Andrew James Donaldson has been honored by The Hymn Society in the United States and Canada during its virtual Annual Conference earlier this month by being named a Fellow of The Hymn Society (FHS).

This award, the highest honour given by the organization, was conferred for his work as a composer, text writer, hymnal editor, translator, church musician, and enlivener of congregational song in local and global Christian communities; and for his service to The Hymn Society.

Donaldson is the third of seven children born to Northern Ontario missionaries. He and his wife, Wendy, have lived in the Hambly Avenue area of the Beach for almost 50 years.

Donaldson received a B.A. in French and English studies from Glendon College, York University (1974), and studied classical guitar at the Royal Conservatory of Music, where he received the Associate Diploma (ARCT) in classical guitar performance (1979).

In 2007, he was recognized by Knox College, University of Toronto, with a Doctor of Divinity, honoris causa, for contributions to congregational song.

Donaldson was on the committee that produced The Book of Psalms (1995) for the Presbyterian Church in Canada.

He accepted co-editorship, with Donald Anderson, of the denomination’s hymnal revision for The Book of Praise (1997). This hymnal was a watershed publication that honored the denomination’s tradition while broadening the musical structures, theological themes, and compositional styles open to Canadian Presbyterians.

Following a workshop on Caribbean, African, and South American music under the auspices of the World Council of Churches in 1988, Donaldson integrated global song into his congregational worship practice, aspects of his own compositions, workshops, and the Canadian Presbyterian hymnal.

International repertoire was especially evident in the musical selections he prepared for Hilariter, his ensemble of instrumentalists and singers who offered events within his congregation and other venues in Canada and the United States.

His love for folk styles is evident in his work as the transcriber and arranger of songs by Canadian Anglican Bishop Gordon Light from the Common Cup Company, including She Flies On and Draw The Circle Wide.

Donaldson’s developing interest and proficiency in global Christian song led to his appointment as Consultant on Worship and Spirituality for the World Council of Churches (WCC) in Geneva from 2011–2016. In this capacity, he prepared liturgies, selecting, translating, and arranging congregational song for daily prayer for the WCC Executive and Central Committees.

He also organized prayers for large international gatherings, including the International Ecumenical Peace Convention (Kingston, Jamaica, 2011) and the Tenth Assembly of the WCC (Busan, South Korea, 2013). His service with the WCC culminated with editing Hosanna! Ecumenical Songs for Justice and Peace (2016), a collection of 86 songs, psalms, and prayers on the theme of the WCC’s Tenth Assembly. His texts, tunes, and translations appear in several recent Canadian and USA hymnals and collections.

Andrew and Wendy Donaldson are regular participants in The Hymn Society Annual Conferences. He served as the Hymn Society President (2004–2006) and has led numerous sectionals and festivals.

Known for his winsome spirit, one often finds him in a supportive servant role behind the scenes, graciously facilitating others’ leadership. He particularly enjoys setting the texts of several Hymn Society members, including Richard Leach, Adam Tice, and John Thornburg, FHS. His favorite composition is We Will Go Out With Joy, a co-composed song with his daughter, Hilary Donaldson.

“At the conclusion of the first festival, I realized that Andrew was much more than another guitar player. I found a new friend in Vancouver and a companion on the journey toward promoting ethnic and cultural diversity in congregational singing,” said Hawn.

The Hymn Society in the United States and Canada was founded in 1922. It is an ecumenical organization of people who are passionate about hymns and congregational song. Open to all, The Hymn Society is made up of scholars, church musicians, poets, composers, choir directors, choir members, clergy, worship planners, song leaders, music publishers, music educators, and people who love to sing. The Hymn Society believe that the holy act of singing together shapes faith, heals brokenness, transforms lives, and renews peace. It’s mission, therefore, is to encourage, promote, and enliven congregational song.

The information in this story was prepared by C. Michael Hawn, and provided for release by The Hymn Society in the United States and Canada.