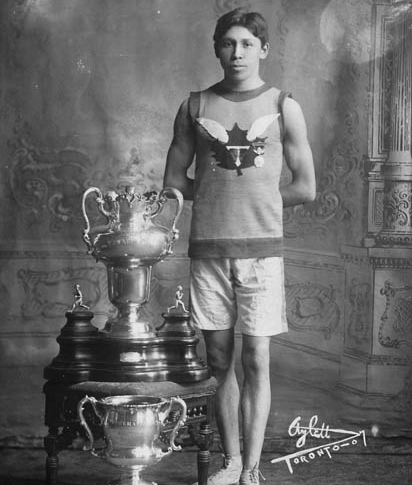 The photo above, from Library and Archives Canada, is of legendary marathon runner Tom Longboat in 1907. Inset photo shows young Beacher Bruce Kidd running on the Boardwalk in the National Film Board's 1962 short Runner.

The Tokyo Olympics officially opened earlier this week and we’ll be rooting for the Beach’s Penny Oleksiak, gold medal winner in swimming at Rio in 2016. Go Team Canada!

The last time the Olympics were held in Tokyo, at the 1964 Games, we had another young hero to cheer on, distance runner Bruce Kidd of Neville Park Boulevard.

The 1962 National Film Board short Runner opens with Kidd running on the Boardwalk, then follows him training in his Malvern t-shirt and competing in a race at East York. Kidd was named CP’s Canadian Athlete of the Year in 1961 and 1962.

Bruce Kidd is now Professor Emeritus at U. of T. and has written a number of books, including Tom Longboat. A 1984 CBC film Wildfire: The Legend of Tom Longboat was based on Kidd’s book, but the great Onondaga marathon runner, born Cogwagee in 1887 at Six Nations, was played by a non-Indigenous actor. Times sure have changed.

If ever there was a story ripe for a feature film, it’s that of Longboat who ran away from Mohawk Institute Residential School and just kept running. He won the Boston Marathon in 1907, becoming a national hero and one of the world’s most celebrated athletes in a racist era.

Running may be the most cinematic of Olympic events. Longboat ran the marathon in the 1908 London Olympics, but collapsed from sunstroke and did not finish. He turned to professional racing, a popular spectator sport.

Longboat served as a dispatch runner in the First World War and used his talents on the battlefields of Europe. If you have seen the brilliant film 1917, you will know the dangers of running messages between trenches. Longboat saw the horrors of Vimy Ridge and Passchendaele first-hand.

One story goes that a British general was being escorted to the front and complained to the dispatch runner, “For God’s sake, slow down! Who do you think I am? Tom Longboat?”

Longboat was wrongly reported killed and his wife married another man. After the war Longboat remarried, raised a family of four kids and worked at the big Dunlop plant on Queen Street East at Booth Avenue. After many years working for the City of Toronto, he retired to Six Nations and died back home in 1949.

Whenever I think of an Olympic film, I imagine runners on a beach in the Oscar-winning Chariots of Fire (1981). “The Flying Scotsman” Eric Liddell refused to run in the 100-metre sprint on a Sunday, but won the 400m race at the 1924 Paris Olympics.

His story after the Olympics is less well-known. Liddell worked as a teacher and missionary in China and met the daughter of Canadian missionaries.

Florence MacKenzie completed her nursing training in Toronto before returning to China and marrying Liddell in 1934. By 1941 the situation in China became perilous and a pregnant Florence Liddell returned to Toronto with their two daughters.

Eric stayed behind and became a prisoner in a Japanese internment camp where he died in 1945. Liddell had planned to settle in Toronto after the war but never got the chance.

Courage can take many forms. There are heroes who are not in the record books. Florence Liddell (1911-1984) raised three daughters while working as a public health nurse in East York and residing on Browning Avenue in Riverdale. She lived long enough to see Chariots of Fire and wept all the way through the movie.

One of Eric Liddell’s ambitions was to work with Indigenous people in Canada. Liddell was in Toronto on furlough in 1932 when he was asked if he missed the Olympic cheers. He replied, “A fellow’s life counts for far more at this than the other.”

To an Athlete Dying Young

The time you won your town the race
We chaired you through the market-place;
Man and boy stood cheering by
And home we brought you shoulder-high.
Today, the road all runners come
Shoulder-high we bring you home,
And set you at your threshold down,
Townsman of a stiller town.