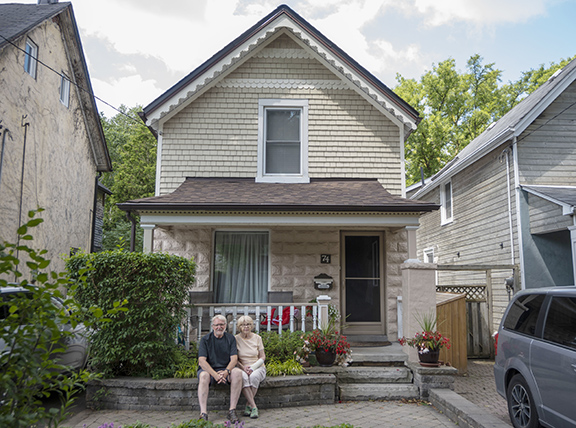 Ken and Glenda Cox in front of their home on Osborne Avenue. Ken's great grandfather William Hinds bought the house in 1905 on what was then known as Edward Street in the Village of Ben Lamond. Inset photos: Three generations of the family from about 1955 in front of the house; and a map of the Village of Ben Lamond showing Edward Street (now Osborne Avenue) and Lakeview Avenue (now Gerrard Street East).

After nearly 120 years, Ken Cox will be the last of his family to reside at 74 Osborne Ave.

After much deliberation, he and his wife, Glenda, decided it was time to move on and head east to Halifax to be closer to their daughter and grandchildren.

Cox’s great grandfather, William Hinds, came to Canada in the 1870s and bought the house in 1905.

At the time, the house was part of “the Village of Ben Lamond” and many of the streets in the area had different names. Hinds raised seven children in the home and worked as an engineer for the Grand Trunk Railroad, along with many other members of his family.

Cox himself grew up playing with friends from the neighborhood at the field behind Ted Reeve Community Arena. His parents, however, called it the Grand Trunk playing field. He and his friends knew it as “The Granny.”

Cox, his father and his grandfather all attended Kimberly Public School and Malvern Collegiate.

Ken described visiting the centenary celebration at Kimberley Public School where one of the original register books was open for display. Sure enough, when he looked through the list, he found the names of all his past family members that attended the school.

Looking back, he reminisced about a neighborhood that looked very different from the one he sees today. Back then, there was still a police station at Swanwick Avenue and Main Street (now home to Community Centre 55), and the homes that are now to the east of Ted Reeve Arena were still a train yard where he and his friends would spend their days climbing around and exploring.

“When we were kids you got up in the morning on a weekend and our mother would say ‘Ok get outside and play’. We took off with our friends on our bikes and we were gone!” he said.

Despite the deep history the family has in the community, it was family that prompted the move.

With a son in British Columbia and a daughter in Halifax, neither are likely to come back to Toronto to take over the house. And with the COVID-19 pandemic, visiting hasn’t been easy either.

“I haven’t seen my grandkids, except for Facetime, in over a year,” said Ken.

“The bottom line is this: when you reach a certain age, you gotta be close to at least some of your family that are going to put you into a facility that has running water and indoor conveniences,” he said. “It’s time to move on and be closer to family.”

As he prepares to leave the area, though, he noted the cyclical nature of the community. Many of the old houses have new, young couples in them, many of whom are starting their own families.

“Now, in the fall and the school year, you see streams of kids going to Malvern, Kimberley and St. John. So, it’s like when I was a kid,” he said.

Along with the house itself, he knows he’ll be leaving behind five generations of memories and family get-togethers when he and Glenda move.

“It’s really difficult because there’s been over 115 Christmases in this house,” he said.

But, in the end, despite the memories, a house without a family just doesn’t feel like a home.

“It’s just a fact of life. Sometimes you just need to move on,” said Ken.