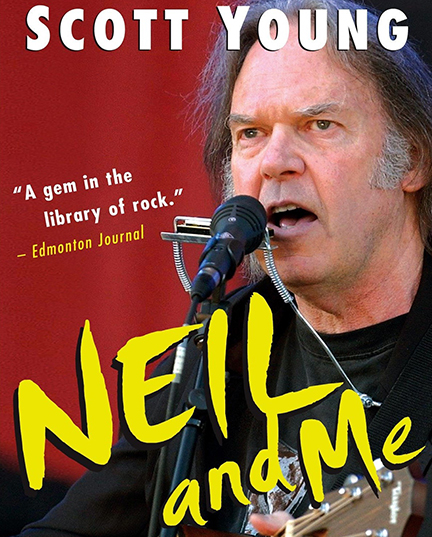 Legendary Canadian musician Neil Young's father, Scott Young, briefly lived in an apartment on Hubbard Boulevard (inset photo) in the Beach in the 1940s. Columnist Bernie Fletcher reflects on some talented Canadians and their Beach dads in this edition of Reel Beach, just in time for Father's Day.

Here’s a quiz question to celebrate Father’s Day (today) and Canada Day (coming up on July 1). What do these talented Canadians have in common besides being born in Toronto: Neil Young, Norman Jewison, Glenn Gould, Christopher Plummer and Eric McCormack?

Answer: At some point in the 1940s their fathers all lived in the Beach.

Many moons ago when I was a wee lad Scott Young (1918-2005) was a popular journalist, author of sports books like Scrubs on Skates and a broadcaster on Hockey Night in Canada in the “Original Six” era. I remember falling asleep on the couch to the strains of the Esso theme at the end of Leaf games.

I wanted to play hockey, not golf, but one night I was dragged off to an indoor golf driving range with my father. There next to us was the famous Scott Young and his son. The fathers talked golf. The quiet, gangly boy with Scott didn’t seem any more interested in golf than I was. Maybe Neil Young had music on his mind.

“Old man take a look at your life, you’re a lot like I was.”

Teens used to call their dads ‘my old man’, but that song wasn’t really about Neil Young’s father. Father and son relationships are often complicated by work, divorce and social change.

Scott and Rassy Young were married in 1940 and moved to Toronto from Manitoba in 1941.

That summer they found a small apartment at 15 Hubbard Blvd. right by the lake.

They loved the Beach area, but were soon expecting a child and needed a bigger place to live. Two sons, Bob and Neil, came along, but the parents separated in the late 1950s.

Neil went to live with his mother in Winnipeg and didn’t see much of his ‘old man’. It was his mom who encouraged his artistic side. The rest is history.

Norman Jewison and his older sister Betty had better luck. Their parents met while tobogganing at Riverdale Park and married in 1919. Percy and Dorothy Jewison ran a dry goods store and post office at the corner of Queen Street East and Kippendavie Avenue from 1920 until 1950. The Jewisons lived in a small apartment above the store. Norman was born in 1926 at his maternal grandparents’ house on Lee Avenue.

A new biography by Ira Wells, Norman Jewison: A Director’s Life, takes a scholarly look at Jewison’s films just in time for his 95th birthday on July 21. Fathers don’t always get much credit. Wells inexplicably names Norman’s father “Joseph” when, in fact, that was Percy’s father, Joseph Jewison.

Percy Jewison (1890-1974) was a pillar of the Beach community: postmaster, member of Bellefair United Church, Beaches Lions Club and a Free Mason, not to mention the “unmentionables” as Percy liked to call himself the “Beach’s corsetier”.

In his memoir Norman writes that his dad was strict, but a “great salesman” who “had a touch of a carnival barker in him” and loved show business. In 1941 Percy was president of the Beaches Fastball League which drew big crowds to Kew Gardens.

Norman Jewison has written about the anti-Semitism pervasive in the 1930s and being bullied simply because of his last name. The Youngs were told they couldn’t sublet their apartment to a Jewish family. The Gold family on Southwood Drive started using the name Gould to sound “less Jewish” though they were Protestant.

The eccentric genius Glenn Gould (1932-1982) was the only child of Russell Herbert “Bert” and Flora Gold, a music teacher. Bert was a furrier and ran the family business, Gold Standard Furs (pun intended?).

The great actor, Christopher Plummer, died recently. He barely knew his father, John Orme Plummer (1894-1977), who wed Isabella Abbott of Montreal in February of 1929, but the marriage did not last past Christopher’s birth in December 1929.

John re-married and lived on Queen Street East and later Silver Birch Avenue across from St. Aidan’s where he became a church warden and wrote a history of the church.

Helping others and serving the community is a McCormack family tradition. Emmy-winning actor Eric McCormack (Will and Grace) promotes charities such as the Canadian Cancer Society’s Plaid for Dad campaign, a cause close to his heart. Eric told ET Canada, “I lost my dad to prostate cancer 13 years ago now…”

James “Keith” McCormack (1930-2008) grew up on Normandy Boulevard in Beach Hill as the son of a popular family physician, Dr. Oliver McCormack, who had his office nearby on Gerrard Street East. Two of Oliver’s brothers were also doctors.

How did so many creative people come from an era in Toronto that Margaret Atwood described as a repressed “anglophone culture at its most yawn-inducing”?

Where does genius come from? Don’t ask me, I only met Neil Young once and he never said a word about his “old man”.