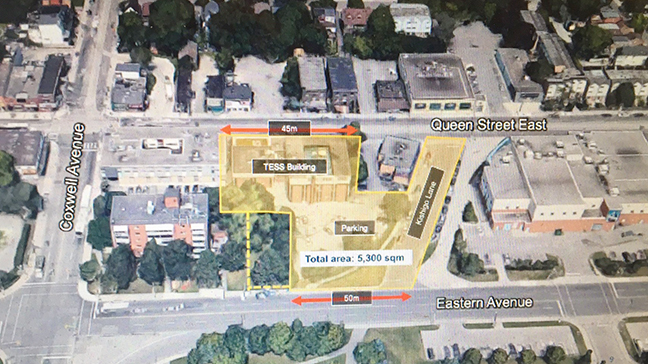 Buildings of 18, 12 and six storeys are planned for this site southeast of Coxwell Avenue and Queen Street East. The proposed 18-storey building will front Eastern Avenue. Inset image shows a conception of the plan by the City of Toronto's Housing Now initiative. The view in the inset image is looking west along Queen Street towards Coxwell.

Like it or not, there is going to be a tall tower (18-storeys high according to the latest plan) built at the south end of a parcel of city-owned land southeast of Coxwell Avenue and Queen Street East.

Numerous residents shared their opinions for and against such a tall building at the site during an online community meeting held Thursday, June 10.

The proposal for the site comes from Housing Now, a City of Toronto initiative to increase the number of new affordable rental housing units within mixed-income, mixed-use, and transit-oriented communities on lands owned by the city.

The site is located on a parcel of city-owned land south of Queen Street East and north and west of Eastern Avenue, and east of Coxwell Avenue. Currently the land is home to the Coxwell Early Learning and Child Care Centre and the Beaches Employment and Social Services (BESS). The Beaches Employment and Social Services office will be relocated off the site. The city and CreateTO are currently working with BESS to identify a new location for this office that can better serve their client base. Office space for it will not be reincorporated in the proposed development.

The city-owned parcel of land to be developed does not include the six-storey Toronto Community Housing (TCH) building at the northeast corner of Coxwell and Eastern or the East End Community Health Centre right on the southeast corner of Coxwell and Queen. Also, the site does not include the land where the Harvey’s restaurant is located, which gives the lot shape an indentation south of Queen. However, the development proposal does include a portion of the TCH lands at 1080 Eastern Ave. A key part of the project will be the Kishigo Lane Indigenous Placekeeping public space on the east end of the site.

The Indigenous Placekeeping space will honour the Kishigo family, an 18th century Michi Saagig Anishinaabe family who lived near the lands. Input on the space’s design is coming from the First Nations, Inuit and Metis communities.

The main points of discussion by members of the public at the June 10 meeting were about the need for affordable housing in the area, the heights of the buildings in regard to the Queen Street East Urban Design Guidelines (UDG), and the need to ensure this project does not set a precedent regarding building heights when it comes to future development plans along Queen Street East in the Beach. Also discussed at length was what would the late Jane Jacobs want.

No one at the meeting said the site should not have affordable housing on it. The debate was what building form it should take, and what development precedents it would set for the area.

Speaking on behalf of the board of The Beach and East Toronto Historical Society, Uwe Semhrau said the precedent being set for Queen Street East in the Beach was their main concern.

“The board is concerned that this is an exclusion from the Queen Street East Urban Design Guidelines, and therefore is a precedent,” he said.

Since the organization making the proposal for 1631 Queen is a City of Toronto agency, CreateTO, the TBETHS is concerned that other developers will point to the city giving itself an exclusion to the Queen Street East UDG and then also demand the same.

“The process precedent of allowing exclusionary development on Queen Street East above the Queen Street East Urban Design Guidelines will impact how developments are approved in the future,” said Semhrau. “How can the city defend against an LPAT (Local Planning Appeal Tribunal), if the city can do it?”

City of Toronto planners and Beaches-East York Councillor Brad Bradford said allowing the higher buildings at 1631 Queen would not set a precedent due to the “unique” nature of the site.

Some of those unique features are that there is not a residential housing neighbourhood backing onto it, at 80 metres it is deeper than any other known development lot along Queen Street East in the Beach, and that it is between two major streets.

Since the 18-storey building will be fronting Eastern Avenue, the case can also be made that it does not even fall within the Queen Street East UDG coverage area.

Bradford and planners pointed out the portion of the proposed building fronting Queen Street East starts out at four storeys in height and angles back to six, therefore completely meeting the UDG standards.

Resident Jeffrey Levitt said the city is going to have to write some very strong and clear language into its documentation of this project to ensure it cannot be used as precedent by others.

“We have to have something, and something that we can sink our teeth into” when it comes to evidence making sure this plan’s approval cannot be exploited by other developers looking to build along Queen Street East in the Beach, he said.

Whether the plan meets the Queen Street East UDG regarding building heights and protecting the neighbourhood’s character was a hot-button issue at the meeting for many, who ranged from cynical to angry regarding this proposal.

“Jane Jacobs would be called a NIMBY (Not In My Back Yard) if she opposed an 18-storey skyscraper. I certainly have been,” said Scott Bullock as he outlined the personal attacks he has faced on social media and beyond for his opposition to the height of this project and demanding that the Queen Street East UDG be followed.

The late Jane Jacobs, who was born in the United States but lived in Toronto for decades, is considered the guru of urban design and the protection of city neighbourhoods from out-of-control development such as expressways and massive highrises.

Bullock said those opposed to the building heights in this development have been characterized as NIMBYs against affordable housing, which is completely untrue.

“Good people worked collaboratively to prevent developers from building skyscrapers,” he said of the UDG which is referred to by some as the Beaches Bible.

“The Beaches Bible has worked perfectly for many years,” said Bullock. “Nobody in the Beach is opposed to affordable housing. This community reliably votes progressive. The only issue on the table is the height of the proposed development on this site.”

He said that instead of three buildings of different heights, the entire 1631 Queen proposal should be one six-storey building of 100 per cent affordable housing units covering the entire site.

In his comments, Bullock challenged Councillor Bradford to be “a hero” and back that idea.

“Stand in support of the Beaches Bible to prevent skyscrapers. This plan sets a bad precedent. Tap into your inner Jane Jacobs,” he said.

In response, Bradford said comparing the plan for 1631 Queen to Jane Jacobs leading the fight to stop the building of the Spadina Expressway through established neighbourhoods in the 1960s was not one he would make.

“I disagree. Jane Jacobs would be supportive of a project that allows people to live in different parts of the city,” he said.

Bradford added that a project that was 100 per cent affordable rental units at six-storeys heigh could not get built. The rent paid on the market-value units has to subsidize the affordable ones, he said.

Resident Michael Genin questioned whether the larger building heights would result in more available affordable rental units in this project. He told the meeting the same density could easily be met in a six-storey building covering the entire site.

“This 18-storey development barely hits the density of an average six-storey development on Queen Street,” he said. “The height is not essential, the same density can easily be reached in the lower form factor without compromise to the affordable housing supply.”

Others at the meeting spoke in favour of the 18-storey and 12-storey building on the site, and said they should be even taller in order to increase affordable housing options on the available city-owned land.

Mark J. Richardson, who has written letters to Beach Metro News calling for bigger buildings and more affordable housing in the area, said he was in favour of higher buildings at 1631 Queen.

He also wanted it to be clear that he is a long-time resident of the community.

“I’m a 20-year resident. I hope that makes me Beachy enough to those waving around their Beach Bibles. I’m interested in seeing more height on the Queen Street side, not less. The more we exploit the floor space for housing, the better,” said Richardson.

“It’s great for people to say ‘I support affordable housing, but…’ ‘I vote progressive, but…’ There’s no but here,” he said.

Richardson pointed out that other Housing Now development proposals on city-owned lands are calling for much higher buildings to increase the amount of affordable rental units, and he cited a 405 Sherbourne St. project calling for a building of 26 storeys.

To conclude the meeting which ran over time to allow more people to speak, Bradford pointed out that the input from residents would be listened to and reflected in the final plan.

“Healthy public participation makes a city work,” he said. “We got a lot of great feedback.”

Bradford added that finger-pointing between those for and against the increased building heights does no good.

“This is about affordability, and liveability and sustainability for our city. It’s should not be about divisiveness and the way this thing is getting torqued.”

The next steps for the Housing Now proposal at 1631 Queen will see a review of the public input from the June 10 and ways to address concerns, followed by a staff report and final plan to go to the city’s Planning and Housing Committee in September of this year followed by consideration for final approval by Toronto Council at its Sept. 30 meeting.

For more information and updates on this plan, including meetings and consultation sessions for the TCH building residents and the Kishigo Lane Indigenous Placekeeeping public space, please go to https://createto.ca/housingnow/housing/1631-queen-street-east/