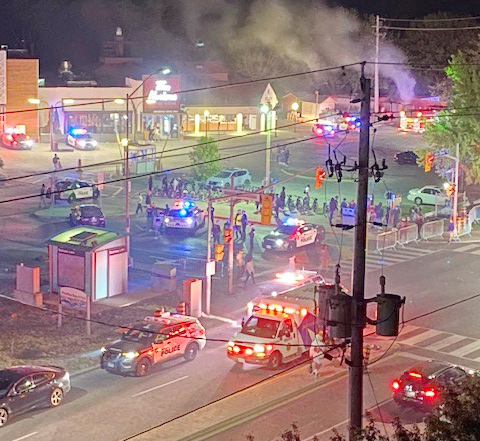 The above photo by Nicholas Dietrich shows police dealing with crowds and fireworks in the parking lot of Tim Hortons on Lake Shore Boulevard East over the Victoria Day weekend. Inset photo shows a warning sign set up near Balmy Beach,.

The behaviour of large crowds at Woodbine Beach and beyond over the Victoria Day long weekend has been called “infuriating” by the local councillor.

Of most concern was the huge amount of litter left behind by people who had no interest in putting the garbage or recycling in the available bins, and of the constant loud noises from consecutive nights of fireworks being set off illegally and of massive sound systems pumping music for hours on end.

Regarding the garbage situation, Beaches-East York Councillor Brad Bradford said in a statement issued on the morning of Tuesday, May 25, that “the behaviour we saw this weekend is really disappointing.”

He said, “I just don’t know what world these individuals are living in – where they think it’s acceptable to just dump their trash and empties in a public park or beach – but to be clear – it’s not.”

Beach Metro News also received letters from angry residents complaining about the noise, litter and what they saw as a lack of enforcement by City of Toronto bylaw officers and police.

Nicholas Dietrich wrote that the situation would have been far less chaotic if the city’s annual 30-minute fireworks display (cancelled both this year and in 2020 due to COVID-19 regulations) had taken place, rather that the free-for-all that ensued.

“Private entrepreneurs bore the full cost of not one, but two wonderful five-hour evenings of safe and socially-distanced fireworks,” he wrote sarcastically.

“Greatly appreciated was a new entry in the fireworks array this year of the deft use of horizontal Roman candle weaponry in the Tim Hortons parking lot and the fabulous smoke and fire effects.”

John Murphy wrote in as well about the huge crowds, parking mayhem on residential streets and the hours of fireworks and loud music.

“I didn’t think it could get worse in the Beach area, well it has,” he wrote.

“This has become a recipe for disaster. This cannot continue in the Beach area of Toronto or any part of Toronto,” wrote Murphy.

“Obviously, there needs to be a larger police presence in this area.”

The bad behaviour and resulting litter was especially disappointing given the city had a plan to deal with trash, alcohol and COVID-19 safety protocols in parks across Toronto including Woodbine Beach Park.

That plan was going to see more bylaw officers and police enforcing the rules. There were also a lot more trash and recycling receptacles made available for park and beach users, and signage urging people to be responsible.

The plan came about given similar concerns last summer regarding crowding and litter in and on local beaches and parks. With COVID-19 restrictions limiting places people can gather, the use of public outdoor space has increased significantly and is expected to continue to do so through much of this summer. “We knew this summer was going to be busy at the beach with so many COVID restrictions still in place,” said Bradford in his statement. “Over the past few weeks we worked to put a proactive plan in place.” For more on the plan see our story at https://beachmetro.com/2021/05/18/increased-bylaw-and-police-patrols-more-frequent-litter-collection-planned-for-woodbine-and-other-local-beaches/

“We’ve had additional bylaw and police officers out Friday to Sunday from 10 p.m. to 2 a.m.,” said Bradford in today’s statement.

“We’ve had solid waste crews out at 5 a.m. Friday to Monday to empty the bins and additional staff to pick up around them. Also, end of day clearing of bins that are full has been happening so material doesn’t blow around overnight. There is action the city and will continue taking. But we can only do so much without the cooperation of the small minority treating our public spaces like this.”

He added that this weekend’s behaviours and amount of trash seemed worse than last year. “We don’t want to shut down the beaches so this is the game of cat and mouse we’re caught in until things get back to normal.”

Dietrich wrote in his letter that along with all the fireworks and bad behaviour by the crowds, he was also disappointed by what he said was a lack of meaningful response by police. He said he is very worried about what will happen over the Canada Day long weekend if action is not taken.