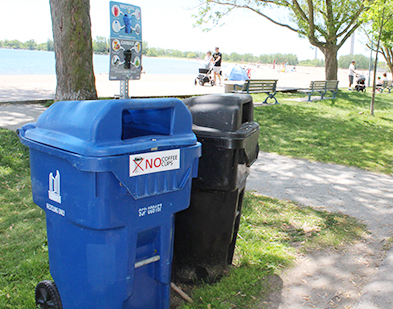 Increased collection of trash and recyclables are among plans for local beaches this year in an effort to deal with what are expected to be large crowds coming to enjoy the outdoors.

In an effort to curb littering and keep the area safe, Woodbine Beach is going to have more trash bins, more staff collecting litter, and more bylaw officers to enforce litter, alcohol, and provincial orders this year.

That’s the result of “extensive conversations” Beaches-East York Councillor Brad Bradford had with city staff members from Parks Recreation and Forestry and Solid Waste Management after reviewing last year’s summer heavy usages of the area and resulting concerns over litter and other issues.

City staff is now making use of lessons largely learned from last year’s experience as COVID-19 lockdowns encouraged more people than expected to gather outside, notably along local beaches and neighbouring parks.

This year, Bradford said the city is taking a “proactive” approach.

“Starting on the Victoria Day long weekend we’re putting more resources from our parks department, solid waste department, police and bylaw enforcement to make sure the park stays a safe and clean place for everyone to enjoy the summer,” Bradford said.

This is in response to the frequent litter and messes left on the beaches last summer, of which Bradford said “we were not prepared to deal adequately with the crowds.”

This year, the city will deploy additional resources and more frequent collection times for litter and garbage, including the litter left around the bins too. There will be more litter bins, frequent replacement of bins, early waste collection, and more staff to facilitate the whole process.

There will be active bylaw officers in the Eastern Beaches, partnered with Toronto police from 55 Division to deploy additional resources.

The officers are there to enforce rules related to litter, alcohol, and provincial orders in place related to COVID-19 restrictions. Patrols in the area will be 10 a.m. to 1 a.m. on holidays and weekends.

“There will also be dedicated signage about physical distancing, and all relevant provincial regulations at the time,” Bradford said.