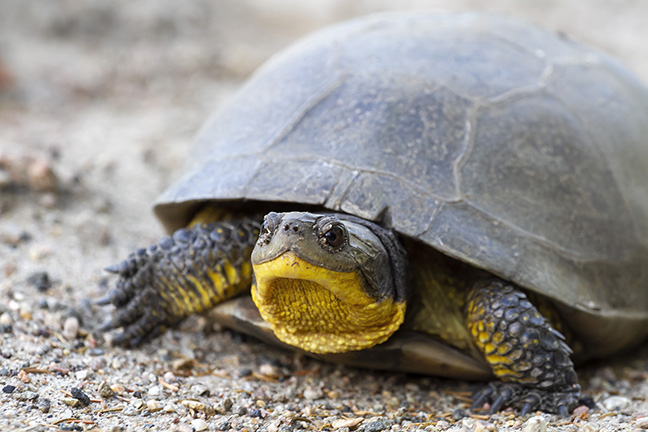 Photo above, a Blanding’s turtle can be identified by its bright yellow throat and domed shell. Inset photo shows a Blanding’s turtle that was discovered by Ann Brokelman and her daughter Jennifer one May day that had a tracking antenna attached to its shell. Photos by Ann and Jennifer Brokelman.

We have all had that moment of panic when a squirrel or a rabbit has darted into the road; we don’t want to hit the poor animal, but we also don’t want to risk swerving and causing an accident.

Surprisingly, one of the most hit animals is one that you’d think would be easy to avoid: turtles. Many people don’t even realize that cars are a serious problem to our local turtle populations.

While it is easy to assume that a turtle is easy to avoid, because it moves so slowly, the fact that it may take five to 10 minutes for one to cross the road means that it only takes a single car, out of potentially hundreds, to not notice it and hit the turtle.

Now that spring has arrived, our armoured reptile friends are beginning to wake up and to look for the right pond or river to settle in. For many of them, that means leaving their current location and venturing across our roads in search of new bodies of water.

If you know you’re driving by anything like a swamp, pond, stream, or river, slow down a little and keep a special watch out for anything that looks like a slow-moving turtle.

Over the years my kids and I have helped dozens and dozens of turtles cross the road. On one long drive, my daughter Jennifer and I must have carefully moved over a dozen.

The photos with this column are from one of the most memorable sightings:It was a warm day in May, several years ago, and the perfect weather for a slow and easy drive somewhere in Ontario. We were enjoying our travels when Jen caught sight of a turtle in a deep ditch on the side of the road.

I pulled over, safely as always, and we went back to see if it needed any help. When we got close enough, we realized it was one of Ontario’s most threatened at-risk species: the Blanding’s turtle. The bright yellow throat and domed shell are the main things to look for. As she slowly climbed out of the ditch, Jen noticed that it had an antenna and a tag on its back. This was something new!

We waited to see if he was going to try to cross the road, and, when we were certain he was, carefully picked him up and carried him across to the other side.

Did you know that turtles like to pee when you pick them up? I do not know if that’s actually the case, but in my experience, it happens every time!

An interesting side story: after we found the antenna and tag, we called local conservation group and told them about the number on the tag. It turns out that this turtle was quite old. We gave them the GPS location and they came by later to look for the turtle’s nest.

Because Blanding’s turtles are endangered, and because the mother abandons the eggs after they’ve been laid, the conservationists will take the eggs back to their centre to give the hatchlings the best chance of surviving until they can grow large enough to be safely released back into the wild. Hopefully in a few more years the Blanding’s turtle population will have recovered enough that this won’t be required.

So how can you help turtles?

First, as much as we want to help them, never put yourself or other drivers in danger. After you’ve spotted one, and only when you’re sure it’s safe to do so, pull over to the side of road and put your hazard lights on.

If there is no, or little, traffic on the road, just stand by and watch the turtle cross. Let nature do its own thing if possible.

However, if there is a lot of traffic in the area, pick up the turtle, with both hands, and carefully take it across the road in the same direction it was headed. I like to wait until they are 20 to 30 feet away from the road before I head back to my car. Please, please, please keep the head away from you: just in case you’ve found a Snapping Turtle.

If they feel threatened, and being picked up is a threatening situation, they will absolutely try to bite you and they can cause serious harm. There is a special way of moving them, so please go to the Ontario Turtle Conservation website and watch the video on how to safely pick one up.

Turtles are amazing creatures. Who doesn’t love to see them basking on a rock or a log, or get excited when you see one scurry away into, and swim around in, the water? All they want is to be left alone to go about their turtle business, and sometimes that business takes them across our busy roads.

Let’s do our best to slow down, keep an eye out for them, and help their populations recover.

If you see an injured or hit turtle please put it in box (I keep a plastic crate in my car year-round) and call your local wildlife centre or conservation group to assist you. We can make a difference.