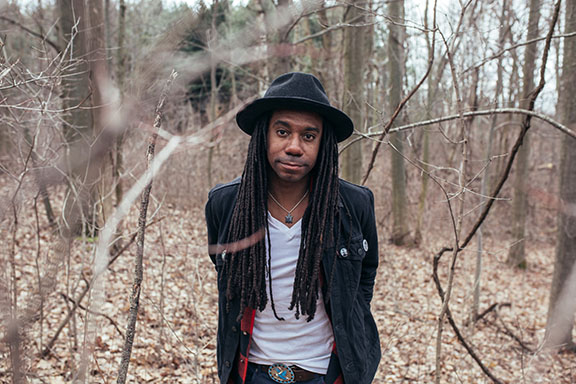 Julian Taylor and his album The Ridge are getting lots of attention including a pair of Juno Awards nominations. He also was named Solo Artist of the Year at the 2021 Canadian Folk Music Awards this past weekend. Photo by Lisa MacIntosh.

From an awards standpoint, 2021 has been shaping up as a pretty good year so far for East Toronto musician Julian Taylor.

Earlier this year it was announced that he had received his first two Juno Awards nominations in the Contemporary Roots Album of the Year and Indigenous Artist or Group of the Year categories for his second solo acoustic album The Ridge.

And on Sunday, April 11, it was announced that he had been named Solo Artist of the Year at the 2021 Canadian Folk Music Awards.

“I’ve been performing and recording music for over 20 years now, and these are my first Juno nominations. So I’m extremely thrilled about that,” said Taylor in a recent interview with Beach Metro News.

“I think my parents are just relieved because they’re like, ‘Oh thank goodness we got the music lessons’. They’re finally relieved. So that’s nice.”

This year’s Juno Awards, the 50th anniversary edition, will be presented on May 16 in Toronto. At this time, performances are slated to take place virtually and the event will be televised from Scotiabank Arena but it cannot be a huge gathering and celebration of Canadian musicians and music due to  COVID-19 safety regulations.

“It’s a bit strange that I’m not going to be able to hang out with people and mingle and make new friends and things like that. But that’s the world we’re living in, there isn’t much we can do about it except be grateful.” said Taylor remarking on his nominations and the virtual ceremony being held this year.

His album The Ridge draws inspiration from the time he spent with his grandparents on their farm in Maple Ridge, British Colombia.

As a Canadian musician, when asked about how he felt about Canadian artists being represented on a global stage he responded with optimism and remarked that Canadian artists such as The Weekend and Drake were “dominating the charts.”

“From a contemporary roots element, which is one of the nominations that I’ve been bestowed, I find that Canadians are doing great there too. I think the reality is that the people in my category are all making waves internationally, which is brilliant. I think it’s a genre that a lot of people may or may not have really paid too much attention to. It’s a storytelling genre, as is the second categories I’ve been nominated for – indigenous artists or group of the year. Storytelling is really about what these two particular genres are about. I like that because my heritage being indigenous and West Indian, in both cultures are very well their oral traditions are very important to their preservation,” said Taylor.

When asked about his hopes for performing live this summer, Taylor couldn’t help but express disappointment about the current COVID-19 circumstances.

“Personally, I’m extremely frustrated. I’ve seen a lot of my favourite places that I would go to see live music in the East York and Beaches community closing. And in the entire city closing. I’m worried for my friends who are in that business. Primarily, musicians are not working,” he said.

Hoping that things go back to normal soon, Taylor maintained his optimism for the future and the upcoming Juno Awards ceremony.

“The universe has a funny way of working, so maybe it’ll bounce my way this time.”

For an earlier Beach Metro News story about Taylor and his album The Ridge, please go to https://beachmetro.com/2020/08/20/east-torontos-julian-taylor-performing-virtually-and-live-releases-album-the-ridge/

Taylor’s music is available to stream and for purchase https://juliantaylormusic.ca/music

UPDATE: Since this story was originally posted the date of the Juno Awards in Toronto has been moved to June 6. The change in date was announced by the Juno Awards on April 14, and was done due to the surging number of COVID-19 cases in Ontario.