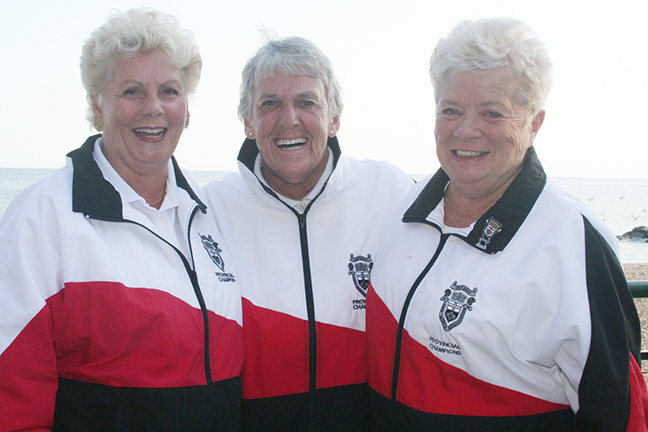 Barb Kelly, centre, became the first female member of the Balmy Beach Club in 1970. She is shown here with Glenna Boston and Jo Waites after their team won the gold medal at the Ontario Seniors Women’s Lawn Bowling Championships in 2008. Inset photos: One of the last pictures taken of the Club in 1963 before if was destroyed by a fire. The members of the "Rideau" squash that won the Toronto and District 1971/72 C Division championship.

As Beach Metro News celebrates 50 years, we spotlight one of the community’s longest-running beach institutions. The Balmy Beach Club was formed in 1903. Here is a look at the Club 50 years ago in the early 1970s. Times they were a changing…

In 1970, seat belts were not mandatory. A local phone call was only seven digits. Most houses still had rotary phones (if you are under 30, ask your parents). You had to line up at the bank on Friday to get money for the weekend. And, if your dad wasn’t home on a Friday night, chances are he was at ‘the Club’.

“Back then, it was called ‘the Club’, not the Balmy Beach Club,” said Paul Babich, who joined the athletic club at the foot of Beech Avenue in 1958 when he was 19 years old.

“After a night at the Alpine Hotel watering hole, I ran into Red Lipsett at the Goof and he suggested I join since I played hockey – membership was $12.” In 1963, the Balmy Beach Club burnt down for the second time (the first fire was in 1936). It was about 2:30 in the morning on a Saturday night when the last stragglers were leaving a fundraising dance. They smelled smoke coming from a storage room. The roof collapsed an hour later. Everyone escaped unharmed.

The Club was rebuilt and in the 1970s, members were ready to enjoy the new building, the new decade and the changing times.

At the start of the 1970s, the Balmy Beach Club membership was men only. It was a place to socialize, have a beer, play pool and book a squash game on one of the two new courts added after the fire.

“The phone would ring at the bar – someone looking for their son or husband – and there would be arms waving in the background to indicate to the caller ‘I’m NOT here’,” recalled Paul with a chuckle.

Bob Fullerton was the president of the Board of Directors in 1970. He joined the Club in the 1950s to play football, after graduating from Malvern Collegiate. At the Annual General Meeting, Bob introduced a motion to allow women and families to join. “The world was moving in that direction,” said Bob. “It was time to bring the larger community into the Club.”

The motion was passed, and despite a group of men who met the next day to oppose the ruling, it was too late to change the decision.

“I went into the Club, saw all those shiny plaques and trophies and I thought, ’I’m going to work hard to get my name on one of those’.”

Barb was a top lawn bowler, representing the Club at regional and national championships in the 1990s and 2000s.

She received many awards and accolades including Lawn Bowling Athlete of the Year and an induction into the Balmy Beach Club Sports Hall of Fame in 2007. She is still an active member today.

Looking back, Barb commented: “Why did we wait so long to take our place!”

Today, the membership is 40 per cent women. The Balmy Beach Club has always been an athletic club. In the 1970s, active sports sections included hockey, lawn bowling, paddling, rugby, squash and beach volleyball. A tennis court was built on the outdoor deck, complete with nets to keep the balls from bouncing onto the Boardwalk, but it was short lived. The court was removed in 1979.

At the start of the decade, the Club was in debt and needed new sources of revenue. The non-profit entity had been operating at a loss for many years.

The record books note a shortfall of $8,000 in 1972, so a number of fundraisers were held including dances and an annual “Smelt Derby” fishing contest.

Former president Bob Fullerton recalled another milestone moment in the early 1970s: going downtown to get a liquor license. Up until then, the Club secured individual permits for their legendary dances and sports events – or, members visited the small bar downstairs which operated on the honour system!

While times have continued to change over the last 50 years, the tradition of sport, camaraderie, community and family still continue today at the foot of Beech Avenue.

Paul Babich, Bob Fullerton and Barb Kelly are all members of the Balmy Beach Club Sports Hall of Fame. Paul Babich is also a past president of the Beach Metro News Board of Directors and currently a Board Advisor.