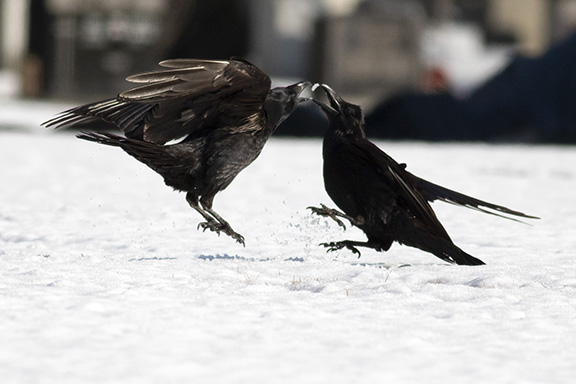 A pair of ravens play a game in which they throw snow back and forth. While often mistaken to be crows when spotted, there are a number of ways to distinguish the birds as ravens including their “croaking” call. They can also be identified by the ruflles or hackles on their throats (see inset photo). Photos by Ann Brokelman.

“Croooaaak. Croooaak.” What is that I hear coming from the sky above my car?

Flying bull frogs? Probably not, but this has been a weird 12 months or so.

I quickly, and safely as always, pulled over, wound down the window the rest of the way, and then heard a second set of croooaaaks. This was quickly followed by a third and a fourth. I looked to the right and saw a majestic set of four ravens landing on, and hopping around, a dead tree.

I knew that they would never hold that position for long, so I tried to get my camera as quickly as possible. Sure enough, they took off, chasing a red-tailed hawk that flew by, before I even had my camera in hand.

I watched as the hawk was chased all over the area for several minutes before it, and surprisingly all four ravens, landed on the same tree. I tried to get close enough for what might have been one of the coolest shots of my life, but, alas, they had all had enough of a rest and resumed their chase before I could get into position. Such is the lament of the wildlife photographer.

The Common Raven (Corvus Corax) has a wingspan of 3.5 to 4 feet (1.5 metres) and is around 24 to 27 inches (43 centimetres) from head to tail. You’ve almost certainly seen one, though you probably assumed it was just a big crow.

Ravens are pure black and, when compared to crows, have bigger, curvier beaks and bristles at the base of the beak. They also have a well-developed ruff of feathers on the throat (see inset photo below), which are called hackles, and which often make ravens seem more unkempt compared to their cousins. But, is there an easier way to tell the difference between a crow and a raven? If your ears are adept, then yes. The sounds they make are quite different. A crow will caw whereas a raven croak.

Also, the tail on the crow is fan shaped, while the raven has a wedge-shaped tail. One more fact: You probably guessed that ravens and crows are in the same family (corvid), but did you know that blue jays are in there too?

Back to my story. The next day I decided to return to the same spot to see if the ravens were there, as I had a hunch that they might be looking to start a nest. Though my lack of camera readiness failed me the day before, this time I came prepared and as soon as I pulled up, I could see two of the ravens on the ground, dancing around each other, and jumping up and down.

Within moments I had snapped dozens of shots. It appeared that one raven had picked up snow in its mouth and was throwing it up in the air for the second raven to catch. I had never seen nor read about this behaviour before and was absolutely enthralled! They played this game over and over for several minutes.

They eventually separated, but the female raven surprised me again by making a sound I had never heard from them before. It sounded like it was saying tic toc, but also like someone was knocking on a door.

Now, ravens are like parrots and can mimic other sounds, and even human speech, so I thought that maybe this bird was copying a unique noise it heard somewhere around the city.

I looked it up on my phone, and discovered it was a relatively common noise and it is usually performed, during mating season, in response to a male who has been, to her satisfaction, strutting his stuff nearby! There is a link to the courtship call at the bottom of this article and I encourage you all to hear it for yourselves.

The female raven, after a few minutes, finally flew away, rejoined the male, and the dancing routine started again. I came back and watched them off and on for a few more days and enjoyed seeing them choose small branches, probably for a nest, caching food in a tree, and performing elaborate twisting and turning flight patterns together. What a thrill to see all of this!

When it comes to intelligence, these birds rate up there with chimpanzees and belong to the second most intelligent family in the birding world; they are just behind the psittacines (parrots, macaws, and cockatoos).

Ravens are known to pretend to put food in one place, but then really hide it in another, in order to fool other birds who may be watching them.

You may have also read anecdotes online about ravens and crows learning to bring objects to people in exchange for food. I’m not sure if these stories are true, but I wouldn’t put it past a raven to find a way to ‘trick’ people into feeding them.

They usually have a lifespan of 10 to 15 years in the wild, and there are reports of them living up to 40 years in captivity.

Ravens are very playful, using sticks, pinecones, and rocks for toys. A group of ravens is officially called an unkindness, though you may also hear a group referred to as a conspiracy. Since a group of crows is called a murder, we humans certainly must have felt a sense of foreboding around these dark, but amazing, birds.