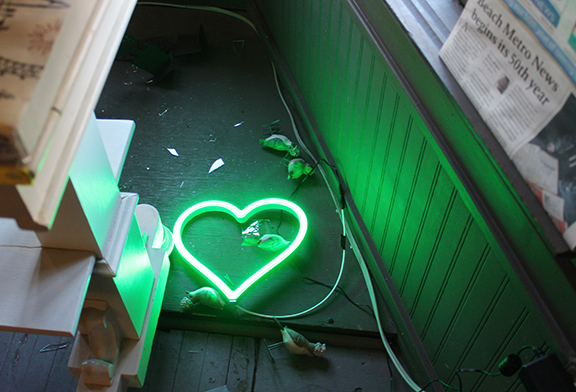 A Neon Hero Heart in support of frontline workers at Michael Garron Hospital lies on the floor of the Chocolate by Wickerhead Co. in the Beach after the shop window in which it was displayed was broken by a brick. Inset photo shows window from the outside. Photos by Alan Shackleton.

A Beach Village shop owner is angry and disappointed by an act of vandalism that took place earlier this week.

Sharon Shoot, of Chocolate by Wickerhead Co. at 2375 Queen St. E., let Beach Metro News that one of her windows had been broken at some point prior to her opening the shop on the morning of Monday, March 23.

What was particularly disturbing for Shoot was that the vandal seemed to target the illuminated Neon Hero Heart that she had displayed in the pane of window that was broken.

“The heart has been in the window for about a week, and they seemed to be objecting to the heart by breaking the window and I’m sad about that,” she said.

The Neon Hero Hearts are being displayed throughout East Toronto in support of Michael Garron Hospital and its frontline workers in the battle against COVID-19. The hearts are designed by local business owner Jeff Moss of Moss LED. Shoot said nothing was stolen from the store and a break-in did not take place. The window was smashed through and the brick used to break it was left on the ground.

She said she contacted police about the vandalism and has filed out a report about it online.

In business on Queen Street East just east of Beech Avenue for the past 12 years, she said such vandalism to store windows is rare.

With Easter approaching, Stone said she is already busy with orders and making chocolates and didn’t need the added stress of this vandalism.

“This is a busy time, and now I have to deal with all this,” she said. “What inspires a person to think this is funny or a good idea?”