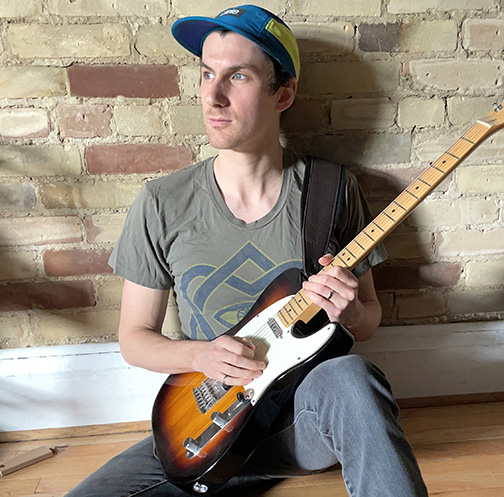 Ten Kettles, founded by East Toronto resident Alex Andrews in 2013, has created a number of apps that help educate and train musicians.

These apps include Waay, hearEQ, Beat Mirror and WaayFinder.

“Ten Kettles has four apps, each focusing on a different aspect of music education. The origin of each app was a little different, but they all arose out of my experiences as a musician, teacher, and engineer,” said Andrews.

Each app has a unique origin story.

He first though of creating hearEQ when he was assisting a student from Coalition Music with sound lessons while the student helped Andrews and his band The Marks with live sound for their gigs.

“During those lessons, I thought – hey, having an app to do ear training here would be fantastic. And that’s how hearEQ came about.” said Andrews.

The app lets the user create ear training experiences using their own music to help them specify the skills they want to develop.

With Waay, Andrews wanted to develop something that would empower musicians to employ music theory as a tool they could use to bring their ideas to life.

The app teaches applied music theory in three lessons – melodies, chords, and progressions. They are delivered with the help of pre-recorded lessons, interactive exercises and progress-tracking tools.

The app Beat Mirror was born out of lived experiences from when Andrews played with his band The Marks.

“I can’t count the number of times we’d finish a run-through down at our jam space at Front and Sherbourne, and then all look around and ask ‘Was that too fast?’ and all have a different answer. Beat Mirror is an app that measures tempo in real-time—answering that question definitively,” said Andrews.

The latest app to launch is WaayFinder. Following a suggestion from his wife, Alicia, Andrews decided to turn what was formerly a free web tool on their website into an app after the tool gained popularity.

“Say you’re writing a song and have a few notes together you really like, maybe it’s the beginning of a melody or instrumental part. You give WaayFinder those notes, and it gives you all the keys that match—closest fit comes first. With the key in hand, you’ll then know other notes that’ll fit what you’ve written—and can find chords to fit too.” said Andrews.

With his apps, Andrews aims to empower and support musicians by highlighting the human aspect of music.

Through Ten Kettles, he is trying to build a space for musicians to learn and build on their skills without any false promises of shortcuts or gimmicks.

“A lot of apps are more interested in collecting user data or finding a way to trick you into endless “engagement” (or payments) without any real benefit to you. I don’t think that’s right. I want my apps to offer real value to people,” said Andrews.

An active musician, teacher and research engineer before he pursued his personal Ten Kettles app venture, Andrews, his wife Alicia, two children and two adopted dogs, moved to the east side of Toronto in 2014 and now live near Monarch Park