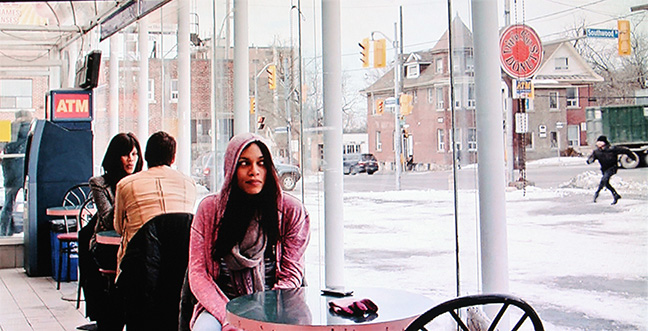 Who can forget the Dip ’n Sip Donuts (photo above) on Kingston Road? Here it is in a scene from 2014’s The Captive with Rosario Dawson. The location is now home to The Big Carrot and the Southwood condos. Inset photo shows the filming of the movie Black Christmas in May of 1974 at the recently closed police station on Main Street. The building is now home to Community Centre 55.

As Beach Metro News begins its 50th year this month, it’s good to look back at the changing face of the Beach.

Old photos and movies can help show us the way we were, long lost memories frozen in time.

Back in May 1974 Ward 9 News reported on “Murder and mystery in station 55”. The horror film Black Christmas was filming at the recently closed Main Street police station before it became Community Centre 55.

The film industry was just getting started in Toronto. My first Reel Beach column (Jan. 23, 2007) was about this heritage building which opened as Station #10 in 1911. No surprise, it became “Bedford” police station in the film.

In 1972 I had a summer job near the corner of Main Street and Kingston Road, which has a long history as a busy intersection.

Hotels were along Kingston Road for more than a century. Over time horses and inns gave way to cars and service stations and lately to condos. I remember two gas stations at that corner, plus Bowles Pharmacy and who can forget the Benlamond Hotel in all its seedy glory.

The “Benny” was demolished in 1989 and replaced by Neighbourhood Link apartments.

The southwest corner became Dip ‘n Sip which was a location for a number of films, including Elvis Meets Nixon (1997) and The Captive (2014).

Not only has Elvis left the building, but donuts and coffee have given way to The Big Carrot and the Southwood condos. The doctors’ offices and apartments on the northwest corner are also gone for new condos.

Does anyone remember the sweet smells wafting from Scott’s Chicken Villa (KFC) at Kingston Road and Malvern Avenue?

What was once a lumber yard became a gas station, then fast food as seen in a 1980 episode of The Littlest Hobo set in the Beach. Hobo also walks across the old, wooden bridge near Glen Manor Drive, now replaced.

My favourite story about local filming was for the classic movie The Black Stallion (1979).

On July 4, 1977 crews were at Kenilworth Avenue and Queen Street East for a difficult scene. A woman who was a teller at the TD Bank (now The Stone Lion) that day wrote that she was startled by “a horse running by the window every now and again until they got it right. A moment in Beach history.”

The story was set in 1946 and needed vintage automobiles and a streetcar. Seaway Meat Market at the corner was dressed up as a grocery store. This location became Lick’s in 1980, but sadly our licks were no more in 2012 replaced by, you guessed it, a condo and a Starbuck’s.

Across the street is one of the oldest wooden structures in Toronto, opened as a grocery by Phillip Whitelock in 1908 and later as Whitlock’s restaurant.

For over a century our community has opposed developments that would ruin the character of the Beach. Can you imagine a railroad along the beachfront (proposed in 1907) or high-rise apartments by Lee Avenue (1964) or the Scarborough Expressway through the heart of East Toronto (1973)?

She wrote: “Fictional film is rarely acknowledged as the historical architectural record that it is. So much of what I have shot has since been torn down.”

Change can be good or bad, but we need to save heritage buildings to remember our past. What will the Beach look like in another 50 years?