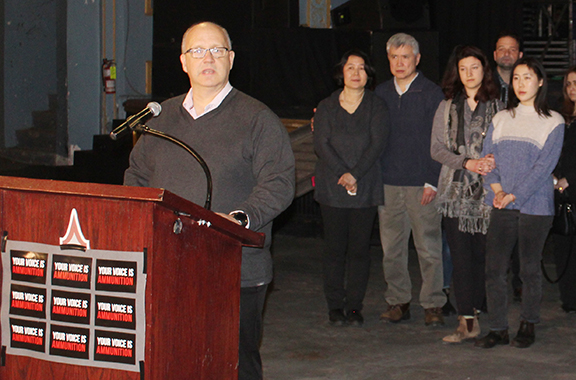 Ken Price speaks at a press conference in February of 2019 with victims of the Danforth Shooting.

New measures being proposed by the federal government to Canada’s Firearms Act and the Criminal Code are a disappointment, says a spokesperson for a number of victims of the Danforth Shooting.

The proposed measures intend to “combat gun violence and keep Canadians and communities safe,” the Liberal government of Prime Minister Justin Trudeau said on Feb. 16. The measures will include fighting gun smuggling and trafficking, completing the prohibition of assault-style weapons, and allowing municipalities to ban handguns.

Ken Price said the proposed changes regarding handguns are “of greatest interest and disappointment” to the Danforth Shooting victims group.

“The proposal that each municipality can determine its own rules has been roundly criticized, as it was when first proposed” in 2019, he said.

Price’s daughter Samantha was wounded in the Danforth Shooting of July 22, 2018 which took the lives of Beach resident and Malvern Collegiate grad Reese Fallon, 18, and Julianna Kozis, 10, of Markham.

Price said the victims’ group was hoping new Firearms Act legislation would ban private ownership of handguns across the country. Trying to enforce it on municipality-by-municipality basis won’t work, he said.

“It is simply too big a country to try and police the use of this kind of weapon – which has no role as anything other than tool for recreation or a tool for crime. And there is too much crime involving handguns so we maintain they should be prohibited from private hands across the country,” said Price.

He said the government is correct in trying to frame the question of gun control as one reducing harm from “the foreseeable misuse of a dangerous product” as opposed to a denial of the rights of gun owners.

Where the legislation falls short is in the details, he said.

The federal government’s proposed combined changes to the Firearms Act and the Criminal Code also include “red flag” and “yellow flag” laws to reduce intimate partner and gender-based violence, and self-harm involving firearms; giving young people the opportunities and resources to avoid criminal behavior; and creating new offences and controls regarding the altering of cartridge magazines, and the importation of ammunition and replica firearms.

“Unfortunately, the detail of what is proposed is, overall, difficult for us to support and many groups and experts have been very critical,” said Price.

“The decision to renege on the election promise of a mandatory buy back of the assault style rifles named last May, the seemingly unworkable municipally driven ban for handguns (versus a national one) and the red flag laws as proposed, are three examples where the proposals miss the mark for us.”

Beaches-East York MP Nathaniel Erskine-Smith (Liberal) said the legislation is a “positive step” forward but does not go far enough.

“It isn’t as strong as our community clearly called for in the wake of such incredible loss to gun violence, so I’ll keep working with Julie Dabrusin (Liberal MP for Toronto-Danforth) and the Danforth Families for Safe Communities to improve both Bill C-21 and any other efforts going forward,” he said.

“While the legislation gives cities the power to enact a handgun ban, I think we should have enacted a national ban on the private possession of handguns. These weapons can already only be used legally at licensed facilities, and they should be stored there.”

Erskine-Smith added there needs to be serious discussion in Canada about smart gun technology, which prevents anyone but the legal owner from using a handgun.

“I know that it’s central to the lawsuit brought by the victims of the Danforth Shooting in our community, and I do think that such technology has great promise to prevent legal weapons from being diverted into criminal activity.”

Price said one of the main purposes of the lawsuit against Smith & Wesson is to make smart gun technology mandatory in Canada.

He said that he did not expect to see anything regarding the technology in new Firearms Act legislation being proposed, but hopes the lawsuit can make it a priority in the future.

“We did not expect this issue to be included. We have not pushed this and were waiting to see if there was a basis in law that we could use, that would be helpful to lawmakers,” said Price.

“We also fully recognize that this federal government is a minority one, and is unlikely to serve its full term – so what has been proposed in Bill C-21 is probably as ambitious as they would be willing to be for now.”

The Conservative Party of Canada said in a statement released on Feb. 16 that the proposed changes did nothing to address the “reality” that the “vast majority of gun crimes are committed with illegally obtained firearms.”

The statement said: “Conservatives have, and will always support common-sense firearms policies that keep guns out of the hands of dangerous criminals. We are calling on the Trudeau Liberals to ensure that Canada’s firearms legislation is based on evidence, not on ideology, and respects the rights of Canadians.”