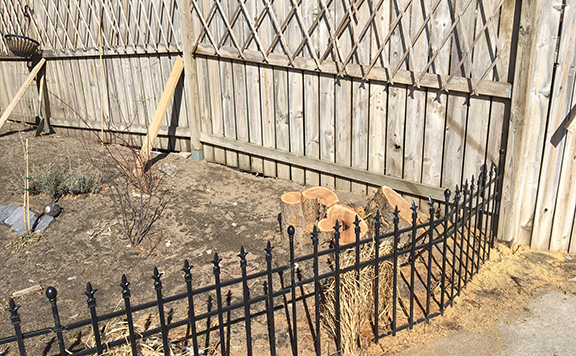 All that's left of the multi-stemmed mulberry tree on Queen Street East at Blantyre Avenue is a stump. The entire tree was cut down on Jan. 28, when only three of the stems were supposed to be cut. Inset photo shows a Google Maps image of the tree.

The cutting down of a mulberry tree at the corner of Queen Street East and Blantyre Avenue late last month has sparked controversy.

“People would come and shake the branches and get the fruit,” said Inta Grintals, a resident in the neighbourhood.

The mulberry tree has been in Grintals’s life since she moved to the area 12 years ago.

Every year, people would gather to collect mulberries from the tree. In the summer it provided shade for walkers, and mulberries covered the pavement. Now, only a stump remains as proof of its existence.

“When I first moved in, the tree was up to the second floor,” Grintals said. “It was like living in a treehouse.”

On Jan. 28, Grintals saw a tree-cutting company truck parked next to the mulberry tree. The workers assured her that they were there to trim the tree, she said, but the tree was gone when they left.

“Birds, and squirrels, and raccoons, and people are going to miss that tree,” Grintals said.

The City of Toronto said that only a portion of the tree was supposed to be removed, but due to a miscommunication the entire tree was taken down.

“Three stems of the tree had decay at the base. Which resulted in the inspector recommending they be removed as the tree presented a potential hazard,” said Andrea Gonsalves, a media relations representative with the City of Toronto, in an email to Beach Metro News.

“A fourth stem, or second tree, that formed part of this mulberry was removed in error due to miscommunication,” said Gonsalves. “Corrective actions have been taken to prevent future errors – crews will connect directly with inspectors where certain stems of a multi-stem tree are to be retained while others are to be removed to clarify before proceeding with work.

The city has promised to remove the stump and plant a new tree in its place. Grintals said she disagreed with the assessment that parts of the tree were in poor condition.

“It was an extremely healthy tree and it continued to grow,” Grintals said, adding how berries fell on the sidewalk.

She said the tree-cutting crew told her they only intended to trim the branches to avoid damaging the hydro line.

“There’s only one hydro line running north and south,” Grintals said, and she said cutting down the entire tree was not necessary.

“It’s mostly about killing a tree that was beautiful and healthy,” Grintals said. “And I don’t know how the city goes around doing that.”