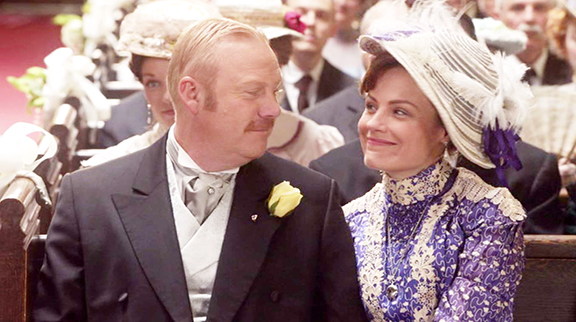 Mystery Mondays are back! Canada’s most popular drama, Murdoch Mysteries, returned to CBC on Jan. 4 for its 14th season.

Our favourite detective, William Murdoch (Yannick Bisson), is a man ahead of his time, but who were the real sleuths of Victorian Toronto?

In 1894 our city skyline was dominated by church spires. Toronto the Good was a bastion of morality.

A glimpse of stocking was looked on as shocking. Police even padlocked the playground swings on Sundays. There was this nagging fear that someone, somewhere, might be having fun.

Murdoch fans enjoy the period costumes, manners and inventions which re-create the look of a bygone era. The series is filmed on location around Ontario and at a Scarborough studio.

Author Maureen Jennings was inspired to create her character by the investigative work of a real Toronto detective, John Wilson Murray (1840-1906).

In 1894 the boss at Police Station #4 was, in fact, Inspector Thomas Brackenreid (1847-1919) who was born in Ireland.
The station was located on what is now Dundas Street East and policed to the eastern city limits.

Brackenreid served the force from 1867 until 1909. His first wife, Mary Ann, died of TB in 1881. Thomas remarried in 1886 and lived in Cabbagetown near the new Riverdale Zoo with his wife, Annie, son Tom and daughter Florence who attended dances at the Balmy Beach Canoe Club.

The gruff Brackenreid on Murdoch is played by Thomas Craig. “Mrs. B.”, Margaret, is portrayed by Arwen Humphreys, who grew up in the Beach and lived here until recently.

One of the joys of the show is the appearance of real life historical figures like Thomas Edison, Harry Houdini and Dr. Arthur Conan Doyle. The creator of Sherlock Holmes actually did visit Toronto in November of 1894 for a lecture at Massey Hall which opened that June.

Murders were sensational news. Many believed that the devil was behind such evil.

In one episode detective Murdoch and Dr. Ogden discuss the motives behind “sequential killers” and mention Jack the Ripper and H.H. Holmes.

Just a month before Doyle’s visit, the “devil” had come to Toronto in the form of Dr. Herman W. Mudgett, alias H.H. Holmes, with two little girls in tow.

The story of Holmes’ killing spree against the backdrop of the 1893 Chicago World’s Fair is told in Erik Larson’s book, The Devil in the White City, set to be adapted into a mini-series by Leonardo DiCaprio and Martin Scorsese.

Holmes murdered the children’s father, Benjamin Pitezel, in an insurance scam. The coroner in Philadelphia, Samuel H. Ashbridge, assigned Detective Frank Geyer to investigate the bizarre death and the disappearance of the Pitezel children. (Ashbridge is a cousin to our founding pioneer family who left Pennsylvania in 1793.)

Geyer came to Toronto in July 1895 and enlisted the help of his old friend, Detective Alf Cuddy (1862-1947) who tracked the children to a home on St. Vincent Street where they found two small bodies.

Newspapers of the day were filled with the gruesome discoveries. Holmes was called “A Wolf in Human Shape” and executed in 1896.

Police were often called on to root out vice and curb the “immorality of society”. In the wee hours of a Saturday night in February 1901 Inspector Brackenreid led a police raid on a home at 2 John St. owned by bartender Thomas Craig and his sister Maggie (Margaret) Craig.

I won’t guess what Tom and Margaret were up to; nothing respectable in Toronto the Good.