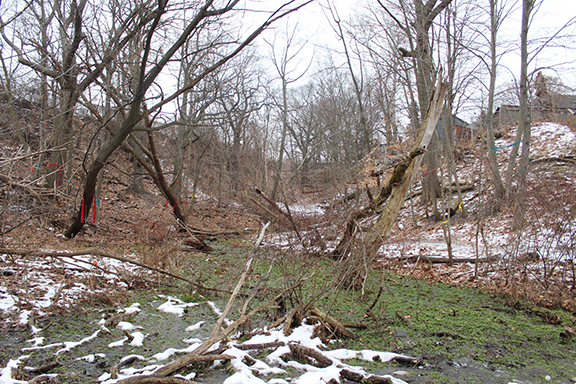 The Small's Creek Ravine, northeast of Coxwell Avenue and Gerrard Street East, is shown in this photo from Dec. 31. Photo by Alan Shackleton.

East Toronto residents are worried about Metrolinx construction plans that would remove 268 trees in the Small’s Creek Ravine, northeast of Coxwell Avenue and Gerrard Street East.

In part of the new expansion of the rail corridor heading east along the Lakeshore East and Stouffville lines, Metrolinx is expanding its railway from three to four tracks in the segment in East Toronto.

The proposed expansion and electrification of the railway is expected to deliver faster and more frequent GO trips along the corridor.

But residents are raising concerns that the project might have long lasting impacts to the environment.

“We’re not opposed to Metrolinx expanding public transit, we think it’s a great idea,” said Paul Westbook. “The heavy handed way they’re doing this is what upsets us.”

Westbrook and another resident, Cleo Buster, both have their backyards facing Small’s Creek ravine. In addition to their immediate stake in the project, they raise concerns as part of a community group called the Small’s Creek Crew, aimed at raising awareness to the tree removals in the ravine.

“It feels like Metrolinx is not being transparent with information regarding this project,” Buster said. “This is one little section of a huge project, but it has a significant impact on the Small’s Creek ravine, and the Williamson Park ravine.”

The group believes there are better solutions for the transit expansion, but further meaningful community consultation is needed.

The number of trees to be removed was not shared with the community, they said, and it was only known to residents in late November.

“As a community, we’ve had geotechnical engineers, civil engineers, architects, landscape architects, a forestry expert,” Buster said. “There’s a lot of skill and knowledge in the community that’s saying this is not right and can be done a better way.”

The group has organized a campaign to “Save Small’s Creek” at https://www.lakeshoreeasttrains.com/smalls-creek-more-information

It includes a petition online requesting Metrolinx to reconsider the tree removal has received more than 1,200 signatures as of Monday, Jan. 4.

The group has also hosted webinars for members of the community explaining the expansion project and the related risks. Members have also distributed flyers to 2,500 homes in the area informing other residents of the project.

Their requests include justifying the need for the retaining wall and culvert in the ravine, and identifying which alternatives were considered and why they were rejected; conducting an ecological integrity assessment and publicizing the findings; and reducing the number of trees slated for removal by 75 per cent.

In addition to the tree removal, residents are also concerned that construction work is slated to take place during overnight hours to avoid disrupting the daytime and evening transit trips.

Regarding Metrolinx’s construction plans (yet to be finalized), residents are also requesting that the schedule avoid work between 1 a.m. and 5 a.m. to reduce neighbourhood disruption, and that noise barrier be installed between Coxwell Avenue and Woodbine Avenue and other noise mitigation solutions be sought.

As residents raised concerns about the lack of community consultation, Metrolinx responded by saying its staff has been consulting with the community in the Danforth-Woodbine area and that its current plan was the best choice.

Beach Metro News asked Metrolinx to comment for this story, but was referred to a Q&A blog post that the agency made to answer several questions from the community regarding the project.

“Recently, Metrolinx staff walked through the Small’s Creek ravine with community members to hear their feedback in advance of construction,” the post read.

“Whether it’s in-person, over the phone, or digitally, the transit agency’s community relations team have been talking with many engaged citizens in the last few weeks,” it added.

The retaining wall is to accommodate the new, four-track line, while the culvert replacement is for flood protection, as the current culvert is reaching the end of its use.

These projects involve significant tree removal to accommodate a new slope, as “the flat portion on top of the current embankment is not wide enough before the ground slopes away,” Metrolinx said.

According to Metrolinx, confirmed by the Toronto and Region Conservation Authority, a total of 268 trees will be removed. Of those, 210 trees are within Metrolinx’s property lines, while 58 are on city-owned lands.

Metrolinx says it intends to also plant an additional 188 trees, and once finished a total of 260 trees and 932 shrubs will be planted in the area to “support re-naturalization.”

Trees must be removed from the slope and cannot be replanted on the slope, as it would be too close to the electrification infrastructure expected to be installed.

Metrolinx has yet to award the contract to a construction company, but “we’re being told that it could happen as early as late January,” Buster said.

“Residents in the Danforth and Woodbine area are expressing real concern about the potential loss of precious greenspace within Small’s Creek,” Berns-McGown said in a statement demanding Metrolinx consult further with residents.

She said widening the corridor and electrifying the Lakeshore East line is important, but Metrolinx must also listen to community concerns.

“Explore options to expand the railway in a way that preserves the integrity of the ravine and as many trees as possible,” she added.

Bradford’s office has also received emails from residents, who are asking questions to Metrolinx regarding the size of the retaining wall, proposed plans and drawings, confirmation that the public pathway will be protected, and confirmation that removing trees won’t damage the local wildlife and habitats.

“I share the concerns I’m hearing,” Bradford said. “Every possible step has to be taken to minimize the impact and preserve as much of these beloved spaces as possible.”

Bradford added that there was consultation in the early stages of the project, but because it’s a multi-year project and the environmental assessment was done three years ago, the local community didn’t hear much about it again until several weeks ago in November.

“There was a lack of detailed information which anyone living across a project this impactful would want to understand,” Bradford said.