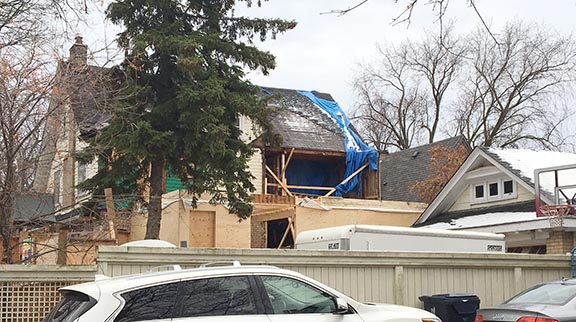 Renovation work being done to the rear of this house at 28 Bracken Ave. is allowed within the City of Toronto's rules protecting heritage-designated buildings. Photo by Alan Shackleton.

Renovations being made to a Beach home that is protected under a City of Toronto Heritage Preservation designation are within work that is permitted under the bylaw, said Beaches-East York Councillor Brad Bradford.

The renovation being done at 28 Bracken Ave. consists of an addition to the rear of the house.

“The city has issued permits for changes to the rear of the property at 28 Bracken. Like all owners of heritage designated property, these residents had to go through an extensive review process before getting their building permits,” Bradford told Beach Metro News.

The house at 28 Bracken Ave., on the northwest corner of Bingham Avenue, was designated as a heritage property by the city in the summer of 2019. The Toronto Preservation Board had called for the home to be designated at a meeting in May of that year.

The two-and-a-half-storey home was built in 1915-16. A report by the City of Toronto’s Heritage Preservation Services, City Planning, Urban Design department said the house “has a design value as an exceptionally finely-crafted example of Arts and Crafts architecture rendered in the Shingle Style which is evident in its complex massing of roofs and dormers integrating a deep veranda, the combination of a brick-clad lower storey with shingled upper stories and finely crafted wood elements.”

Also, the home’s prominent location on a corner lot was another reason why it was given a heritage designation.

The home was first owned by Clara and Alfred G. Hill.

Bradford said advocacy from community members played a large role in bringing the home to the attention of Heritage Preservation Services and its eventual designation.

He added that the city’s heritage rules work to “strike a balance between preserving our local history with the flexibility for things to evolve and for homeowners to make changes.”

The work being done on the house will change the rear of the property, Bradford said, but “these should be in keeping with the heritage status and not detract from the important role this property has as a marker of the neighbourhood’s rich architectural history.”