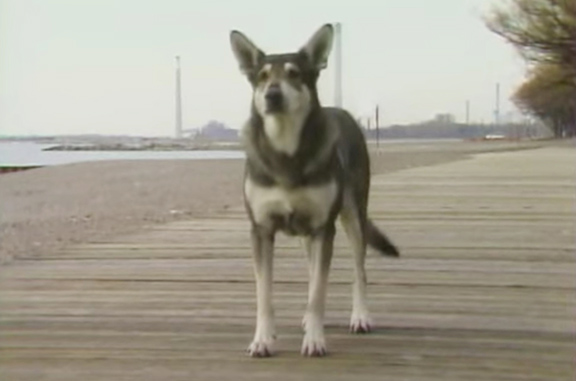 The Littlest Hobo on the Boardwalk in the 1979 episode Diamonds are a Dog's Best Friend.

This year has gone to the dogs. Our four-legged friends might be the only “happy campers” these days. Walk? Sure! Make “fetch” happen. Sure! Pets can help us reduce stress in trying times.

Beachers love their own canine pals, but which showbiz dog is your favourite from childhood memories?

Lassie, the rough collie? Toto, the Cairn terrier from The Wizard of Oz? Or maybe Snoopy, the beagle from Peanuts?

“Pawsome” performers, for sure, but to many Canadians the answer might be London, the German shepherd from The Littlest Hobo television series.

He should know. Garrison was a writer and story editor on the Canadian series in the 1980s. He also taught English Literature at Centennial College and the University of Toronto.

Garrison describes Hobo as “a human being trapped in a dog’s body with all the limitations, like not speaking”.

“You had to think of Hobo with special qualities, with human understanding, who could recognize dangers and react with empathy.”

Hobo didn’t start out as a Canadian icon. First there was a 1958 Hollywood film about the wandering hero, then a television show from 1963-1965 filmed in Toronto and Vancouver.

The series was revived from 1979 to 1985 with filming all around the Toronto area. In each episode London would stop to help people in need, then move on.

The Littlest Hobo gave roles to many a Toronto actor, including a 16-year-old Mike Myers who played Frisbee in Kew Gardens in the 1979 episode Boy on Wheels.

But the real stars were the incredibly trained dogs that played London and went everywhere with their owner Chuck Eisenmann (1918-2010).

Garrison says “the real trick of writing for Hobo was working with the dog trainer”.  Garrison tells the tale of first meeting the former pro baseball player.

A big, gruff man came into the office with four look-alike shepherds: “Where’s that story guy? That writer? I see what’s in that typewriter. Put it in the garbage!”

One dog jumped up on the desk, pulled the paper out of the typewriter and tossed it in the wastebasket. His owner yelled, “Hi there, I’m Chuck!” Garrison adds, “The rest was history.”

There were several dogs that played London depending on their special talents. Garrison says. “It was always amazing what they could do. You had to know what the dogs could do and put that into the action. Would one dog be able to do it?”

One double episode (Sartech 1 and 2) is special to Garrison because his daughter Becky acts in the show. It’s also the highest rated of all 114 episodes on imdb. You can find it on YouTube.

The Beach is featured in several episodes. You can check out what our area looked like in the 1980s complete with those big, ugly cars.

There’s even a police chase around Glen Manor Drive (and Hobo crosses the wooden bridge) in Duddleman and the Diamond Ring (1980). We see a lot of Queen Street East including the Goof and the Fox Theatre. Does anyone remember the KFC franchise on Kingston Road where Hobo saves the day? Diamonds are a Dog’s Best Friend (1979) has Hobo on the Boardwalk. Another episode Escape (1980) shows the R.C. Harris Water Plant as a prison.

The Littlest Hobo has a place in Canadian hearts. You’ll find him down the road somewhere…