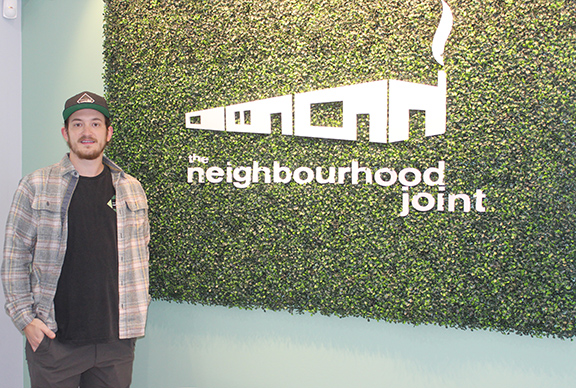 With a number of cannabis stores opening their doors along Queen Street East this summer, local owners say that connection to the community will be what makes the difference for them and their customers.

Recently, Beach Metro News visited with the owners of three stores to find out why they chose to open in East Toronto, and what they think the keys are to running a successful cannabis retail business.

All three stressed that being a part of the community through supporting local events and campaigns along with welcoming customers and becoming good neighbours are critically important.

The Neighbourhood Joint opened in August on Queen Street East in the heart of the Beach, just west of Kew Gardens.

Andrew Rhodes, who is co-owner along with his dad Brian, said the Beach was always the area in which they wanted to open their store.

“We got to know the area and really like it. There is not anywhere else like the Beach,” he said. “It’s the perfect community for a shop like ours.” Afif Khan, who is co-owner of Wonderland Cannabis along with Matt Haddon and Greg Moffatt, said their location on Queen Street East between Coxwell Avenue and Craven Road is exactly where they wanted to be when they decided they would open a cannabis store.

Proximity to the Beach, Woodbine Park and Leslieville was what they were looking for in a location for their first store, he said.

“This area fits with our brands. There’s lots of artists and people in the film industry in the area,” Khan said of the store that opened in August.

A bit further west, Elisa Keay of K’s Pot Shop said Leslieville was the dream location for the store she and her husband Sean own.

“We raised our kids on Alton. We’re so happy to be in Leslieville,” she said. “Our ethos matches the neighbourhood, which is why we gravitated here.”

The store, which also opened in August, is on Queen Street East between Hiltz and Alton avenues, so it is like a homecoming for the Keay family to be in that location.

All three store owners say they have been well received by community members since opening their doors.

“We really haven’t had anyone complaining about us. I have not seen anything negative. People love it,” said The Neighbourhood Joint’s Rhodes. “We have had people from all walks of life walking in to check us out from 90-year-ladies to 20-year-old boys.”

He said educating customers and the community about cannabis and the different ways it can be used is a top priority for The Neighbourhood Joint.

“We want to help educate residents about cannabis and we love to meet our neighbours,” said Rhodes. “We want to be a good, stable influence in the community. We definitely want to be a store for everyone from seniors to young adults.”

On the education front, he said store’s staff is knowledgeable and happy to take the time to answer questions from customers. They also plan to offer education events at Community Nights when safe to do so under COVID-19 safety protocols.

The Community Nights will cover topics such as Cannabis 101; CBD 101, How to Roll A Joint, How to Consume Edibles and more. “People can learn about cannabis without having to dive in,” said Rhodes.

The Neighbourhood Joint is also involved in a number of campaigns to help the community including a winter clothing drive for families in need. They also plan to help with food and toy drives in advance of the holiday season. “We would love to partner locally on those drives,” said Rhodes.

Also, down the road The Neighbourhood Joint wants to be involved in a community building project. They will be asking the community make a pitch for something that is needed to help improve or make the area better – and this will be a physical project most likely. They hope to get other local businesses involved and also see if they can get contributions toward it from a licenced producer of cannabis. More info on that will be available in the New Year.

Wonderland Cannabis also has plans for community events once it is safe to hold them again.

They will be focusing on events that promote the arts and local artists, said Khan.

Once COVID-19 restrictions clear, Wonderland Cannabis plans to hold some 19-plus events in Woodbine Park and at other local venues.

“We will integrate the product line and the events,” said Khan.

He said Wonderland Cannabis sees many ways to support the local arts community, including having members give input on their products and the creation of future products.

They are looking to the community/customers for inspiration and consultation along that line.

“Produced by artists for artists,” is what they are emphasizing, said Khan.

He also said the reaction to the store in the neighbourhood has been very positive, and people enjoy visiting.

It’s been “really great” since the store opened, he said. “People really like the experience.”

Khan said that while certain items have to be kept out of open customer access in the store by law, there are lots of items that customers can look at and touch while shopping.

“We have lots of completely organic beverages for instance. It’s a hands-on experience here. A lot of stores are like jails and you can’t touch anything. We’re a lot more friendly and inviting. We’re well suited to the area and folks seem to love it.”

For K’s Pot Shop, they are involved in the community in many ways and one of their main projects right now is creating a mural on the west side wall of the store. Right now it is “a big grey wall on what is a transitional strip between retail and residential areas,” said Keay.

However, there is a history of a mural being on the wall and she wants to bring art back to the site.

Keay said the mural will take a “celebrate the neighbourhood theme”, and won’t be an ad for their business.

“The landlord said he didn’t want a big marijuana leaf painted on the wall and that was never our plan,” she said. “We want it to not be a big grey wall. We want a nice community piece.”

Since there is a “culture of art” in Leslieville, she said they will be consulting with the community about what the mural features and are planning of having it done by a local artist. “We want to do a lot of public consultation,” she said.

K’s Pot Shop is hoping they can start with something small this year while the weather is still nice enough to paint, and then work to something more permanent come next spring.

Keay said running a cannabis store is basically like any other business as at the end of the day it comes down to customer service.

“We understand that whatever your store is, you have to connect to the customers and the community,” she said. “You can set up a shop and sell and make a living, but we are joining the community because we are already part of the community and know the people.”

Keay said many people coming into the store feel like they are in the living room of someone’s home, and that is exactly what they are aiming for at K’s Pot Shop.

“We aspire to not be a boutique, but that it’s like coming to our living room and hanging out,” she said.

For more information on The Neighbourhood Joint, please visit www.theneighbourhoodjoint.ca